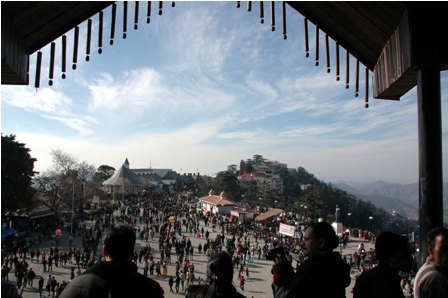 Year after year on new yearâ€™s eve, hooligans in the guise of new year revellers overrun Himachal Pradeshâ€™s hill stations,and Shimla is the hardest hit by this fast spreading epidemic.

Along with the many decent tourists who head for the hills to celebrate the new year, there are also the black sheep in the crowds who relish ruining the new year holiday of others.

They can be spotted easily.Gangs of these young men descend on this picturesque town from the plains,often drunk and drugged.They are brash and loud,sometimes crude,abusive and violent.

As the sun sets for the last time in the old year and evening falls in the queen of the hills, it sees a big rush of cars like never before,all entering town and none leaving, as Shimlaâ€™s human and car population explodes many times.

If you happen to be a commuter heading uphill after Kalka you will see these rowdy young men charging up in their cars,with blaring music and frequent screaming.

As the night grows in the heart of Shimla the seething crowds push,shove, stamp and literally breathe down your neck on the Mall and the Ridge.

This is the time you need to watch for the hooligans in the crowd.As if let loose from jails,bands of them move menacingly on the streets,while the cold air reeks with alcohol.

Old timers here tell me they have stopped leaving their homes on new yearâ€™s eve,so bad they say is the atmosphere in Shimla on the last day of the year.

They say the noisy tourists make it hard for them to stroll on the streets,their glares and sometimes verbal assaults of women both local and tourist is enough to ruin their family new year celebrations.

But the most disappointing is the attitude of the police who often stand by silently and ignore the boisterous and beserk men.

Smoking,shouting,spitting even walking on the wrong side of the Mall road is not allowed by the police on 364 days of the year.But on new yearâ€™s eve there seem to be no rules.

Strangely,all the rules are broken on this day as gangs of youth screaming with liquor bottles in their hands (unthinkable on the Mall)awkwardly and crudely shouting â€˜happy new yearâ€™.

Some of the agitated men can even be seen fighting and clashing with each other,except the policemen donâ€™t seem to be in the mood to do anything,they only stand by and watch the show silently.

Why donâ€™t you act I have asked the armed khaki men over the years.They say they are instructed by their bosses to be patient with tourists who are simply enjoying new year celebrations their style.

They say, police disciplining of new year revellers will give a bad name to Himachal tourism and send a wrong message to visitors.

But many residents naturally dismiss this attitude of the police.Instead they insist these hooligans in the garb of new year revellers should be dealt with strongly by the local police.

Many of the rowdy revellers come in from Punjab,Chandigarh,Haryana and Delhi.Their cars are already fuelled.They come stocked with liquor and eatables.

Many of them donâ€™t even spend a night in a hotel here.Some donâ€™t even buy a meal,they only munch the packed â€˜parathasâ€™ from home.

After spending a few hours in Shimla and the nearby hills they return without spending a rupee in Himachal.So how is Himachal tourism or the people of the hill state gaining by their arrival, many ask !

Infact, these hooligans come here only to shout,scream,fight and puke on the streets and return in the wee hours after polluting the queen of the hills.

A travel agent told me such people only leave behind empty liquor bottles,plastic bags and unpleasent memories both for the local and the sober tourist.

And as if this wasnâ€™t enough,even as they drive uphill or downhill they pose a big accident threat to busy commuters on the Kalka-Shimla highway.

It is time the state government,mainly the police department puts an end to the spread of â€˜hooligan tourismâ€™ and make Shimla a civilised place on new yearâ€™s eve !