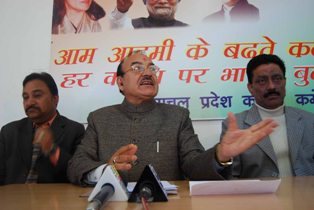 Shimla: Congress today wrapped the State Election Commission (SEC) of being passive about violations to election code of conduct taking place in the ensuing election to Panchayat and urban local bodies.

Talking to the media, Kaul Singh, Pradesh congress president said that ministers and BJP workers were making gross misuse of official machinery and the state election commission had done nothing about it.

He said that bowing to the government, SEC had withdrawn flower as an election symbol for candidates in the upcoming elections, whereas some candidates has only objected t to rose flower being made an symbol as it could be confused with lotus by the voters.

About the scheduled launch of free ambulance service on 25th December, the PCC president said it was an blatant violation of the election code of conduct.

When pointed out that the state election commission had permitted launching of the free ambulance service in the state, he said the launch could have been delayed by a week and the service could have been made operational without a formal launch.

This clearly showed that SEC was being partial and favouring the ruling party in the ensuing elections, said Kaul Singh.