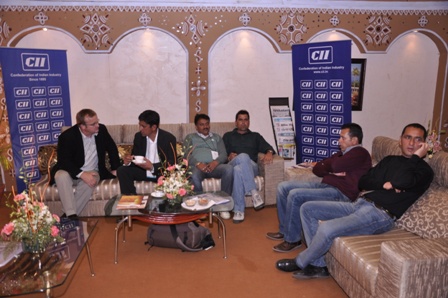 Shimla: In the face of changing climatic patterns in north western Himalayas, apple orchard owners of Himachal Pradesh are on the lookout for low chilling variety plants so as to combat the general warming of the climate in the fruit producing belts.

Orchard owners participating at the CII organized â€˜Apple Festâ€™ conference-cum-exhibition at Agrotech 2010, Chandigarh, held from 3rd to 6th December, in an interaction with delegates from Italy and New Zealand exchanged views about climate change related plant survival and productivity issues.

Delegate from New Zealand, Gary Jones from Pipfruit â€“ New Zealand said that there were opportunities for the two countries to collaborate in the field of horticulture.

â€œExperiences gained in various processes of production and marketing could be shared to overcome various constraints as well as combat climate change,â€ said Jones at the Production Technology session on the Conference on Apple and Stone Fruits held on 5th December. Jones offered to host an Indian delegation of apple growers in New Zealand.

Speaking at the conference Rajeev Chauhan, Chairman, Himalyan Apple Growers Society said that it was important for orchard owners to keep abreast with the changes in growing techniques and employing suitable technology for growing fruit crops.

Yoginder Diwan, CII HP State Council member and MD of Himalayan Vegefruit Ltd., stressed upon the a need for standardization of fruit grading so at to fetch better market returns.

Emphasizing upon collaboration with farm universities, industry and government, he expressed the need for rejuvenating senile orchards was required.

K Kumar, heading Fruit Science research at Dr YS Parmar University of Horticulture & Forestry, Nauni gave a detailed presentation about the newer varieties that were becoming globally popular. Speaking about China, which was the worldâ€™s leading apple producing country, he said that 80 percent of popular Fugi variety was being grown in China.

GS Pandey, Additional Secretaryf Horticulture, Uttarakhand, asked for forming a special group of scientists, policy makers and industrialists to find solutions being faced in development of horticulture in various states. He pointed out that there was need to give attention to water management related to various plant varieties.