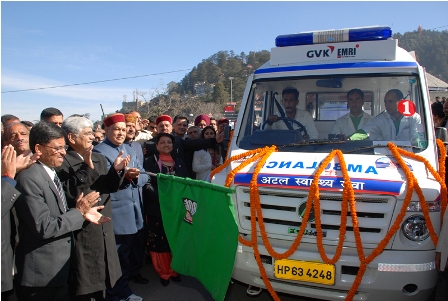 Fifty ambulances were flagged of here by the state chief minister P.K.Dhumal in six districts. 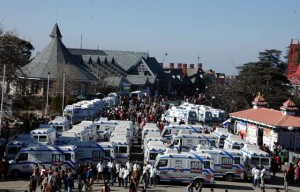 â€œAnother 58 ambulances will be added to cover all the twelve district of the state by February next year,taking the total number of ambulances to 108,â€said Venkat Changavalli,CEO,GVK EMRI, a Hyderabad based non-profit society.

The round the clock free service has been named â€˜Atal Swasthya Sewaâ€™ on the birthday of former prime minister Atal Bihari Vajpayee.

A public private partership (PPP) agreement between EMRI and the state government has already been signed in July this year.

Around 669 personnel will be deployed to provide this service which includes 300 pilots(drivers) 300 emergency medical technican (EMT),4 doctors,13 communication officers.Police will also be deployed to coordinate medico-legal cases.

The response time of ambulances is targetted at 25 minutes in urban areas and 35 minutes in rural areas.

â€œWith the launch of the service we hope to reduce morbidity and mortality due to accidents,poisoning,cardiac emergencies,stroke,snake bites and decrease maternal and infant mortality,â€said Chagavalli.

Due to the stateâ€™s tough terrain,Himachal has a high accident rate in the country.Around 1000 lives are lost and 5000 get injured every year due to accidents.

Many suffer disabilities due to lack of timely medical care as a result of stroke,heart attack,poisoning,burn and snake bites.

GVK EMRI is sucessfully running this service in nine other states of the country.