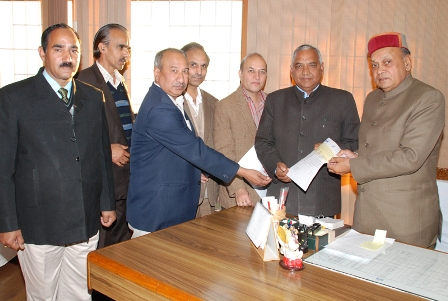 Shimla: The HP State Civil Supplies Corporation, one of the larger states PSUâ€™s, has reported a net profit of Rs 1.89 crore for 2009-10 and today presented a cheque of Rs 17.57 lakh to chief minister Prem Kumar Dhumal as dividend to the government on its paid up capital.

Managing director Daljit Dogra said that during the last financial year the corporation recorded a business turnover of Rs 1122.74 crore, which was Rs 177.09 crore more than the preceding year.

We are perhaps, the only public sector undertaking in Himachal that has been earning profit and paying regular dividend since inception of the corporation, said Dogra.

The corporation has been able to report a profit despite handling a Rs 250 crore government business of lifting and distributing the public distribution system (PDS) supplies without even taking any handling charges.

â€œTo meet the governmentsâ€™ objectives, we do the PDS business free of any charges and donâ€™t even levy any handling charges,â€ he said.

The civil supply corporation also operates about 30 drug stores at various hospitals, which had a business turnover of about Rs 32 crore in 2009-10.

Besides the food and civil supply minister Ramesh Dhwala, other senior officers including principal secretary Prem Kumar and Daljit Dogra were present while handing over the dividend cheque to the chief minister earlier today.

Speaking on the occasion, Dhumal said the civil supplies corporation was one of the best performing public sector undertakings that other organizations needed to take inspiration from.

However, the chief minister asked the management to ensure supply of essential commodities to every retail outlet in the state in time, especially in the tribal and difficult areas well before the onset of winter season.