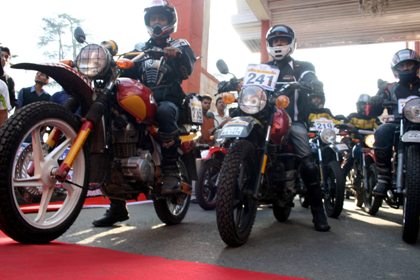 Shimla: Aspiring to uncork the champagne on the winner dais after a grueling 6 day of motor rallying through what is perhaps the toughest terrain in the world in Manali, as many as 166 teams were flagged of at the ceremonial start off of the 12 Raid de Himalaya here today.

Chief minister Prem Kumar Dhumal, flagged of the Raid at the ceremonial start held at Hotel Peterhoff. Speaking on the occasion he said that within the Himalayan geography, the route this year was passing through lower hills and riverbeds of the Shivalik ranges around the Sirsa River and Nalagarh. 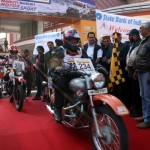 With flash floods in Leh and heavy rains elsewhere having battered the hilly roads, organizers Himalayan Motorsport have been forced to re-route the Raid track for both safety and competitive reasons.

Spokesperson, Manjeev Bhalla said, â€œthe six day sporting event would traverse a distance of 2000 Kms through a challenging route in the Western Himalayas, with the first leg starting from Pinjore on Sunday.â€

As the popularity of the event holds, there are as many as 281 participants, the largest for any motorsport event in the country, who will make up the 166 teams that were cleared by the technical scrutiny experts.

Overseas presence, marked by a strong contingent of 6 bikes entered as Team Austria is a team to watch out for. In all, there are 51 bikers competing for the top title. Battle hardened Ashish Moudghil, a regular at the Raid since 2006, is riding a Yamaha WR 450. Winner of last yearâ€™s John Mark James trophy – Amardev Singh, is also in the fray.

In the 4 wheelers X-treme category there are as many as 40 teams participating, which include last yearâ€™s winner Major Amarinder Brar in a Maruti Gypsy as well as veteran of many Raids Suresh Rana.

The Adventure Trail category, which is open to all motorsport enthusiasts – some of whom later scale up to the X-treme category, has 75 teams participating, said Bhalla.

Against 6 women participants last year, this time around there are 11 of them. In the 4 wheel category the youngest participant is 20 year old Apurva Kaushik and the oldest one is 60 year old Harvijay Bhaia.

Among the bikers the youngest one is 19 year old Parikshit Thakur and the oldest is 55 year old Rajeev Khanna.

To overcome timing disputes, the competitors would be using a electronic card timer for recordings with marshals and for live tracking during the rally all vehicles have been fitted with Hi-Tecpoint devices, which have a Black Box-Vehicle Tracking System embedded.

Along the 2000 Km route about 800 Km is marked as the competitive section. The Raid happens to be one of the toughest motorsport events in the world, where the skills and control of professional and amateurs are put to test on some of the highest motor able roads in the world.