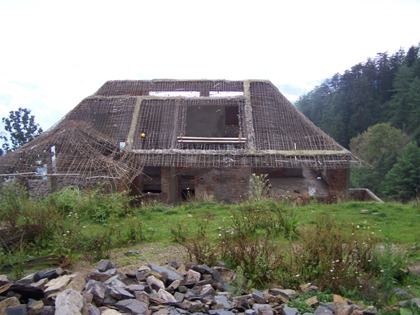 Shimla: Plans of having a slate roof for Priyanka Vadra (nee Gandhi’s) summer cottage at the commanding heights of Charabra Hills have gone awry and the prestigious property after being put back on the drawing board is in for a major overhaul.

“The slate roof was seeping and had to be dismantled,” said Neeraj Saini, an employee of a Delhi based Kohelika Kohli Architects who was supervising the construction work.

Kohelika Kohli Architects took up the job of re-doing the under construction cottage only in April. Earlier another Delhi based firm was responsible for the construction.

“Maintaining the hill architecture style that blends with the landscape, instead of slate now galvanized corrugated steel sheets would be used for the roofing,” said Saini.

Not just the roof, the interiors too are in for a refit as the room sizes are being changed.

The flaws in the design and material surfaced despite, Priyanka and her mother Sonia Gandhi having made frequent visits to inspect the construction work.

There is a lot of work to be done and it would require about another year to complete as during winters construction work would have to be stopped for a few weeks, said Saini.

The cottage was expected to be ready by October-November, 2010.

The Gandhi family has been a frequent visitor to the deeply wooded Charabra Hills (13 Kms from here) where the presidential estate The Retreat and the Oberoi’s Group’s luxurious Hotel Wildflower Hall are located.

With a desire for a summer cottage close to these woods, Priyanka Vadra bought out three and half bigha (over half an acre) of farm land plot near the presidential estate in 2007 by paying Rs 47 lakhs.

The Himachal government relaxed the land laws to permit the sale and construction of the cottage only began after the President of India gave a security clearance for allowing a residential cottage near the high security summer holiday resort for the President.