Shimla: Having attained total financial and credit inclusion, banks in Himachal have been able to bring about 73% of all households under revolving credit, though the state government has asked scheduled banks to increase credit flow and improve credit:deposit ( CD )ratio, which is below the national level.

The chief secretary also asked banks to provide a ‘Gateway’ facility for online deposit of various taxes fees and VAT which would give convenience to common men.

She also emphasized the need for banks to cover all eligible and willing farmers under Kisan Credit Card scheme in the State. 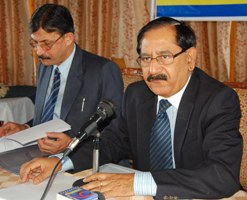 Ajai Kumar, executive director of UCO Bank and convener of the SLBC let the media know after the meeting that against an target of Rs 5181 crore loans in 2009-10 banks in the state had disbursed Rs 5391 crore of loans.

Loans to agriculture sector at Rs 1894 crore was 134% of the targeted amount, he added.
Kumar added that Himachal besides having the distinction of having achieved full financial inclusion and credit inclusion, 73 percent of households had been brought under some kind of revolving credit scheme.

To improve CD ratio, which was below 40 percent in 7 districts, he said that lead bank heads for the district have been made responsible to see off-take of credit increases.

He said that a committee headed by the deputy commissioner of districts would look into ways and means of improving credit:deposit ratioâ€™s.

â€œOne of the reason for low CD ratio was,â€ said Kumar, â€œthat most large hydel projects, cement plants and other large projects were taking loans from outside the state, which donâ€™t get reflected in the states accounts but boost the CD ratio of the states from where the loan is taken.â€