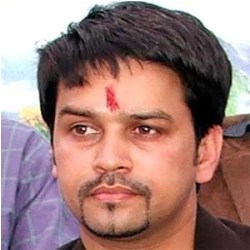 Shimla: Celebrations broke out in BJP camp here today with announcement of Anurag Thakur, a two time MP from Hamirpur and son of chief minister Prem Kumar Dhumal as the national president of Yuva Morcha.

Confirming the appointment JP Nadda, BJP general secretary from Patna over phone said that Anurag Thakur today had been appointed President Yuva Morcha, the youth wing of the party.

With Anurag being announced as the national president of BJPâ€™s youth wing, Himachal marks a significant presence in the national party as senior member Shanta Kumar is already a national vice-president and Nadda is national general secretary.

Thakur also heads the HP Cricket Association, a election as president of the sporting body which he won for the third time just a week ago.