Shimla: To develop a curriculum for the total literacy program, Gyan Vigyan Samithi, an NGO, intends to include information about National Rural Health Mission (NRHM) and National Rural Employment Guarantee Scheme (NREGA) and other government programs so as to directly link adult education with livelihood and health issues.

Speaking about the innovative model, Om Prakash Bhuraita, director of the NGO that has been appointed as the state resource centre for the total literacy campaign said, a pilot in 15 panchayats of Shimla district would be used to develop a suitable strategies and methodologies for the program. 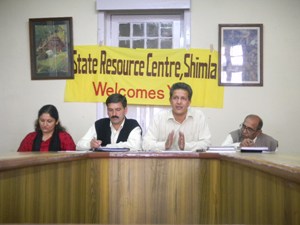 Bhuraita said that with Chamba being one of the 365 districts in the country selected under â€˜Saakshar Bharat Mission – 2012â€™ which has a female literacy rate less than 50%, â€œthe adult literacy literature to be prepared for the mission would be developed in this pilot and would involve convergence of information about various government programs and skill development related to it.â€

He said that about 8000 volunteers would deployed to impart literacy to at least 1 lakh people in Chamba district, which has a female literacy of just 32 percent.

To improve women literacy, the large number of women self help groups in the state would be targeted under the adult education program, he added.

Though the state has one of the highest literacy rates in the country at 82% but the 2001 census had shown that there were about 10.86 lakhs people who were illiterate in Himachal.

The literacy campaign started by GVS had been able to cover about 4.20 lakh people of the targeted 7.20 lakh between 1992-95, said Bhuraita.