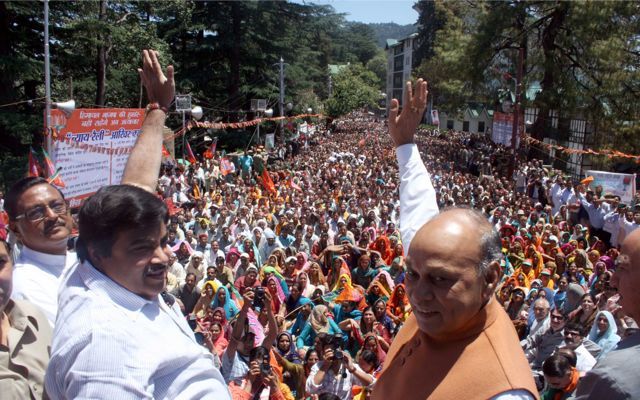 BJP president Nitin Gadkari today said that congress paints BJP as a villain and as an anti-secular party just for electoral gains whereas it was the wrong policies and bad governance of the UPA government led by Prime Minister Manmohan Singh that was responsible for much of the countryâ€™s problems.

Addressing a mammoth rally, where the ridge top Chaura Maidan space fell short to accommodate all the party supporters that had descended on the capital, Gadkari said â€œit was bad governance and wrong policies of the UPA government that was responsible for high inflation and the high prices of essential commodities that people had to live with.â€

He said that the data about forward trading of essential goods presented had not been refuted by any congressman or cabinet minister.

â€œWith very little of the stock traded having been converted into delivery clearly showed that most of it was mere speculation that had artificially driven up prices,â€ he said. The BJP president also pointed out that the irony with prevailing high prices of agriculture produce was that farmerâ€™s suicides were still taking place.

In comparison to neighboring countries, inflation was highest in India. There was an urgent need for economic and social justice which the UPA government was incapable of delivering, he said.

Gadkari said that congress was incapable of protecting the country. â€œInfiltration by China had taken place in 147 places,â€ he said adding, â€œand the government has done nothing about it.â€

BJP was not anti-Muslim in anyway, otherwise why would a government led by such a party decide to field Abdul Kalam as its presidential candidate, he said.

The BJP president said that congress was using terrorism for political ends where BJP is painted as a villain and labeled anti-secular.

Taking a dig at the structural organization of congress, he said that it was to the credit of BJP that an ordinary person like him was able to rise and be party president. â€œThe congress does not offer you such a choice for the party president post had been reserved in advance and would continue to do so,â€ said Gadkari.