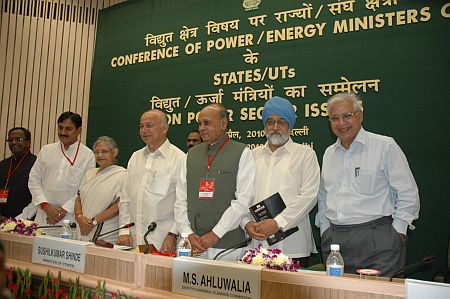 Shimla: Chief minister Prem Kumar Dhumal disclosed that Himachal would add atleast 600 MW of additional generation capacity in the current financial year which could increase by as much as another 1000 MW, if the large 1000 MW Karcham Wantgoo is commissioned during the fiscal.

Speaking at the power minister conference in Delhi today, Dhumal disclosed that Allain Duhangan, Malana-II, Budhil, Chamera-III and some mini and micro hydro electric projects that aggregate to about 600 MW of additional power are scheduled to be commissioned during 2010-11.

Besides it was very likely that the 1000 MW Karcham Wangtoo project could be commissioned during the financial year, he added.

To bring down power costs, the chief minister asked the central government to fund creation of new transmission assets for evacuating power at reasonable costs. He said that Himachal had formulated a master plan for a transmission network that entails an initial investment of Rs 4500 crores.

He said that it was ironic that when demand in summer months picks up in most part of the country power generation in the Himalayan region too picked up but when internal demand peaked in the winter months the generation falls substantially.

To overcome winter shortages, the state was going ahead with plans to set up a pithead based captive thermal plant in West Bengal.

He projected that winter demand was likely to touch 800 MW in coming years and sought that to bridge the shortfall in demand and supply, the central government needed to enhance allocation from present 145 MW to 400 MW from ultra mega power projects to the state.

Presenting the states power reforms program, he said that under accelerated power development reform program (APDRP) projects worth Rs 118.75 crore were under execution and additional proposals worth Rs 92 crore had been submitted to Power Finance Corporation for undertaking I T related projects under the scheme.

He said that all the major urban locations and high intensity electricity consumption areas had been covered under the APDRP scheme in the state.

Projects sanctioned under Rajeev Gandhi Gramin Vidyut Yojna (RGGVY) would be completed by 2011, he said.

The chief minister made a case of including 1 % as free power share towards local area development for which appropriate steps needed to be taken under National Hydro Policy.

He said that large number of hydro projects could not be included in the electricity plan as many projects were awaiting clearance with the Central Electricity Authority that is already overburdened with such tasks.

Dhumal also repeated the states case for 12% free power from Bhakkra Beas Management Board (BBMB) under national hydro policy that should be applied to all hydel projects regardless of their dates of commissioning.

An additional 3,200 MW power would be added to current installed capacity by the end of 2011-12 in the state. He said that the target had been fixed to generate 17000 MW electricity in the state by the end of 12th plan.

About energy conservation programs, Dhumal said that around 270 million units of energy worth Rs 100 crore is being saved annually after implementation of ‘Atal Bijli Bachat Yojna’ under which four CFL lamps were provided free of cost to each household at a total cost of Rs 80 crore.