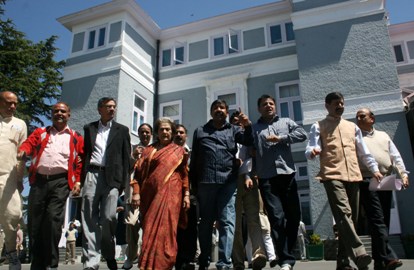 Shimla: Demanding withdrawal of a case against congress legislator Subhash Manglet, the opposition members today protested by storming the well of the house and shouting anti-government slogans in an attempt to disrupt the houses proceedings for the day.

Trouble started the moment the house commenced for question hour and leader of the opposition Vidya Stokes getting up to demand an immediate discussion on an adjournment motion moved by 3 congress members about registering of the FIR against the MLA from Chopal on Monday.

With the speaker Tulsi Ram not ceding to the oppositions demand and asking for completion of the question hour before any other business could be taken up, the opposition trooped into the well of the house shouting anti-government slogans.

To the oppositionâ€™s demand, the chief minister Prem Kumar Dhumal said that the FIR would not be withdrawn and only after an inquiry was conducted on a complaint filed by Ramesh Thakur, Sub-divisional Magistrate (SDM) Chopal, about intimidation and threatening by the legislator would the matter be considered.

Earlier, Stokes said that legislators Harshwardhan Chauhan, Mukhesh Agnihotri and Sudhir Sharma had moved adjournment motions about diluting power, privileges and rights of an elected representative and stopping him for discharging his public responsibility.

Terming it a serious matter, the opposition sought to know whether legislators had any privileges. Stokes said that Manglet on Monday had moved a privilege motion against the SDM and it was after that the government registered a FIR against the MLA.

Speaker Tulsi Ram attempted to calm the opposition saying that question hour was of uttermost importance and any discussion could be considered after that. He said the adjournment motions had only got to him an hour before the session and the matter was yet to be examined.

State congress president Kaul Singh said that double standards were being applied while implementing the law as it was different where BJP workers were involved and another yardstick was used when it came to congressmen.

He said that the MLA had only asked the whereabouts of the SDM as he was frequently absent from his place of posting and was found absent when communal tension flared up in Chopal. He was not available on a day when six people died in an accident also, he added.

The congress leader said that should the government move to arrest Manglet, all 23 congress legislators too would face arrest.

Unmindful of the slogan shouting that the opposition was indulging in the house well, the speaker took up the question hour and all questions raised by congressmen were left unanswered as they were not on their seats. Even an call attention motion moved by Stokes could not be taken up and the house was adjourned at noon, barely an hour after proceedings commenced.

Later speaking to the media, the chief minister said that the government was bound to protect government officials while discharging their duties. He said that the Chopal SDM had in a written complaint to SSP Shimla stated that he was threatened over phone of dire consequences by Manglet on 5th March, 2010.