Shimla: Surya Roshni, a leading lighting company, other than drawing up plans to setup a unit in Himachal is out to introduce energy efficient public lighting systems in cities, tourist spots and religious places, company officials disclosed here. 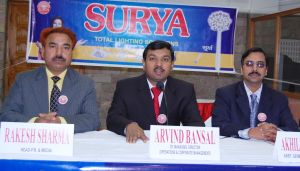 Speaking to the media Arvind Bansal, deputy managing director Suray Roshni said, as Himachal has taken the lead in adopting new lighting technology by switching from conventional bulbs to CFL lighting for domestic usage, their company which was a leader in high mast lighting could bring about at least 35 percent energy savings in public lighting.

High Mast Lighting systems in various height configurations made from hot dip galvanized steel are suitable for wind velocities as per Indian standards and these systems are used to light up large open areas like Airports, Ports, Express Way Junctions & Large Parking areas. The range includes Energy Saving Luminaires that are used with CFL, T-5 lamps and 50W SON-T Plus lamps. A new generation luminaire series is available with the LEDs for various indoor and outdoor applications, company spokesman Rakesh Sharma said. 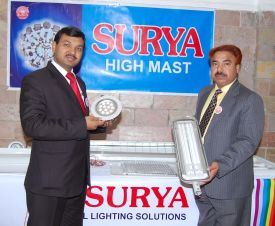 The company has two factories one in Uttarakhand and the other at Gwalior producing Tube Lights, GLS & CFL lamps, HPSV/ Metal Halide Lamps rendering it as the countryâ€™s second largest lighting company in the country.

The groupâ€™s turnover (Lighting & Steel) ending March 2009 is more than Rs.1750 crores. The company is in the process of setting up one of the Countryâ€™s best High Mast Lighting and Poles factory at Gwalior as well as a â€˜state of the Art â€˜Lighting Laboratory at Noida.