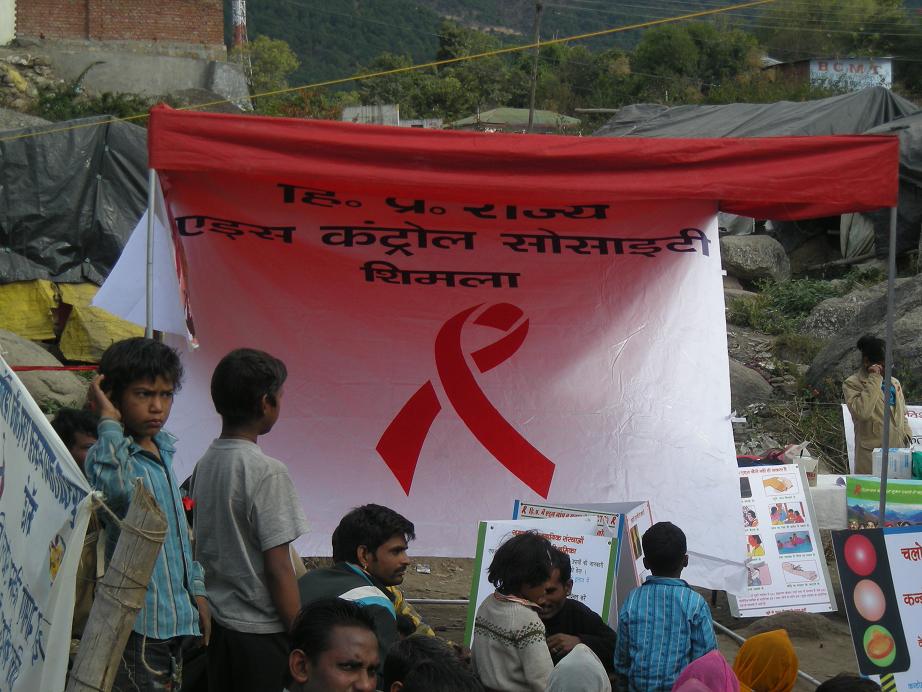 Dharamshala: Under the ongoing World AIDS Campaign w.e.f. 1-25 Dec 2009, an awareness camp cum voluntary counseling and testing outreach camp under Know your Status was conducted for migrant labour at the biggest slum in the District- Charan Khad near Dharamshala in collaboration with local NGOs Tong Len and CORD. In this outreach camp 385 people got themselves tested for HIV and availed the free and confidential HIV testing services. Dr RK Sood DAPO Kangra told that all tested negative which is a pointer to effective educational and condom promotion activities by NGOs. He said that most people who are HIV infected don’t know their status till they develop AIDS as a HIV positive person can be clinically healthy and the only way to know one’s status is through a blood test. People need to learn their HIV status- if they are negative they can be relaxed and take precaution for future to remain negative. If they test positive they can avail the benefit of free treatment, which is available at Shimla and Hamirpur by HPSACS, and live long & healthy life with Anti Retroviral Therapy. Condoms were also distributed to the migrants. He added that under the National AIDS Control Programme, Integrated Counselling and Testing Centres confidential HIV testing services are available. Patients can walk in to the centre without any OPD slip and avail the free facilities.

As per the 2001 census 30% of the country’s population (307 million) and 36% of the population in Himachal have been reported as migrated which is an increase of 37% over the 1991 census. In addition the state has a large influx of migrants from Bihar Jharkhand Chhattisgarh Nepal Orissa and Rajasthan of over 6 lakhs. NAREGA, a flagship programme by the DRDA and Ministry of Rural Develoment has led to significant decline in out-migration in the District – which is good sign for HIV prevention, as people stay with their families. This has led to decline in vulnerability of the population. Similar effective implementation of NAREGA in EAG states will decrease the in-migration to the state. India’s rapid economic development and growth over the last decade has resulted in increased levels of mobility. Large infrastructure and development projects coupled with industrial growth have encouraged young people and workers from all over the country to move to major cities and states.

HIV prevention and health care services need to be specifically targeted towards migrants and mobile populations as they are often not registered as residents in the area where they work and tend to have poorer access to such services. In areas of rapid economic development and increasing internal migration, factors such as separation from family and communities and harsh working conditions contribute to an increased vulnerability of migrants and mobile populations to HIV and other sexually transmitted infections as they engage in unsafe behaviors such as unprotected sex and injecting drug use. Migrants are specially vulnerable to HIV due to lack of information on HIV/AIDS, as well as STIs, culture and tradition within the migrantsâ€™ community are also push factors for their risky behaviour, loneliness and homesickness; peer pressure plays an important role in encouraging the conduct of risky behaviour. The needs of companionship and biological urgency also plays important role for them to get involve in casual sex relationship, and this often has great impact to their relationship with their spouses, partners and family back home. Nevertheless, the impact on family who is left behind requires extra attention as well. The spouses and partners are as vulnerable as the migrants themselves. Carrying the same reasons of loneliness and needs of companionship, spouses and partners often get involved into casual sex relationship that made them vulnerable to HIV. Awareness and reaching out to this special population is thus an essential part of the AIDS response.