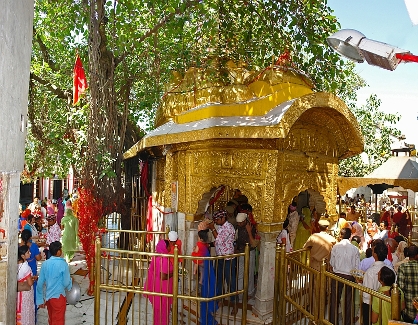 Shimla: As gold prices hit the roof, securing and managing over four quintals of the precious metal for some millionaire temple trusts of Himachal being guarded in state treasuries has become a problem for the government. Looking for a safety net, plans are afoot to secure the bullion in gold bonds with Reserve Bank of India and other banks.

â€œThe proposal is to first refine the gold offerings lying secured with government treasuries and then bank it with RBI or other banks, not only for safety purposes but also to earn interest on it,â€ says Manisha Nanda, principal secretary language art and culture and is responsible for overseeing running of temples trusts that are controlled by the government.

The issue was put before the cabinet who have approved it and the department is in the process for drafting a legislation that would be placed before the Vidhan Sabha, she said. Only after enacting a law would the concerned temple trusts be approached for availing the scheme, she added

Sources disclosed that mounting coffers of about 10 temples shrines was becoming a security problem at the various treasuries stationed in district headquarters where these shrines were located. Not just the about 410 Kgs of gold, even the silver offerings made by devotees over the years has accumulated into several quintals, source privy to the matter disclosed. At prevailing Rs 17,000 per 10 gms price, the gold alone is worth about Rs 70 crore, he said.

The temple managements after accounting the gold and silver offerings made do keep aside some percentage of the precious metals for regular usage and deposit the rest with government treasuries. To safeguard it, the trusts have to pay for the security provided by the district administration.

There are atleast 13 millionaire temples, which include Chintpurni temple in Una, Naina Devi in Bilaspur, Jawalamukhi, Chamunda Devi and Brajeshwari Devi in Kangra, Baba Balkhnath in Hamirpur, Bhimakali and Hateshwari in Shimla with large gold and silver offering deposits lying in government treasuries.

Chintpurni temple, the richest of them, alone is reported to be having accumulated gold offering of about 130 Kgs. In 2006, the temple had recorded a cash collection of Rs 20.8 crore and 25 Kg of gold.

Management of several temples were brought under the HP Hindu Public Religious Institutions and Charitable Endowments Act, 1984, whereby a commissioner was made incharge of supervising the temple trust affairs.

Besides converting the offerings into bullion, the government also intends to mint souvenir coins of varying weightage of deities of the concerned temple, like that done by the Vaishnoo Devi Shrine Board, to be sold to devotees, said Nanda.