Shimla: Should the central industrial package not be extended; Himachal would continue to provide incentives for setting up fruit processing units in rural area, even as it would review viability of public sector units that are unable to survive competition and the new private universities being set up would be regulated by the education department, chief minister Prem Kumar Dhumal stated here today. 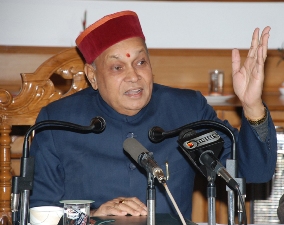 Responding to the media queries at a conference held to mark two years in office, the chief minister held the central government responsible to a fits and starts approach about incentives under the industrial package that deprived Himachal of using the investment opportunity to its full potential.

He said the government has asked for extension of the package beyond the original ten year period to provide a stable investment environment in the state.

However, he added, that should the centre decline to extend the package beyond March 2010, the state would step in for supporting fruit processing units in rural areas.

About loss making PSU’s, the chief minister said that they cannot be kept alive just to meet out salaries of employees for development funds have to be diverted to support them.

â€œThe government has no business being in hotels,â€ he said adding, â€œbut to open new areas to tourism where the private sector is hesitant to invest, the state can set up set up hotels in such areas.â€ Speaking about the fate of debt trapped HPMC, a fruit processing PSU, Dhumal said, working of such government companies is being reviewed for bailing out perpetual loss making organizations is not a sustainable solution.

To make the state into an educational hub, the government has approved setting up of 16 private universities of repute, he said. All these institutes would be subject to government regulation and should anybody decide to close down a university within its first 25 years of operation, the land would be vested with the state, said Dhumal.

Speaking about resolving inter-state issues, the chief minister said that construction of Chandigarh-Baddi highway and improving the Pinjore-Baddi highway had eased traffic problems in the industrial belt and extending the Mohali express highway to Baddi would provide direct connectivity to an international airport.

Citing central-state differences, the chief minister said that Himachalâ€™s food grains quota had been reduced, no relief had been provided against heavy losses due to natural calamities, the centre was dithering on extending the industrial package and even after considering threats to national security, the central government had not moved on the need for extending the rail network in the region.