Shimla: Sterilizing a sizeable enough simian population to have a visible impact on the problems being faced by the exploding monkey numbers in the hill state is still a distant target, to cope in between the government is considering others ways to save farmers from these wild marauding armies. 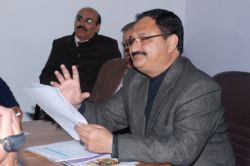 “As scientific culling or exporting monkeys for medical research purposes is being opposed by animal activists,” says Jagat Prakash Nadda, minister of forest and wild life, “we are looking at other ways by which we could assist farmers not just to contain their population but to guard crops.”

“For protecting crop lands, a license to kill monkeys is easily available,” said Nadda. A proposal to get guarding crops included as an employment avenue under the national rural employment scheme (NTRGA) is being pursued, he adds.

As an experiment to contain monkeys within primate parks by providing food within the confined area has all but collapsed, the minister said that government was also open to considering a cost sharing mechanism with farmers who kill rouge simians damaging crops. “Sharing of gun cartridges costs used for the purpose can be considered,” he said.

Expressing his frustration in protecting a family owned mangrove, Rakesh Pathania, an independent legislator from Nurpur, “I had to cut the plantation because raiding armies of monkeys have not let a crop mature for years.”

Facing similar problems, Piyush, an apple orchard owner in Kumarsain says, “protecting a crop from fruit set in April to harvest in September, needs to be guarded for 16 to 18 hours a day, if there is to be some food on my table.”

However, the minister says that experts consider sterilization as the shortest method for containing the exploding simian population. “Starting the sterilization program has found support with the central government,” he said.

Other than Shimla, monkey sterilization clinics are operating in Hamirpur and Gopalpur in Kangra. Another one is to come up in Una.

The Tutikandi clinic in Shimla has been declared a national centre which the central government would fund and would use for training purposes for states faced with the need to contain monkey populations, said the minister.

A sample count had projected the states monkey population at over 3.5 lakhs, two years ago and being localized to inhabited areas, the man-animal conflict was sharp over vast tracts.

With just 11,280 monkeys sterilized in over a year, it will be awhile before the rising conflict could find a resolution here or elsewhere.