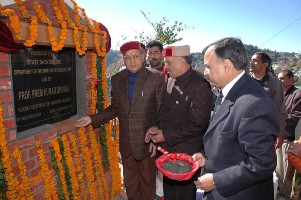 Speaking at a function of throwing open an SMS gateway for providing public services such as copying agency, electoral rolls and arms licenses, the chief minister said e-Samadhan was making headway in providing transparent and responsive governance.

A number of peoples problems on a daily basis were being solved by various departments through e-governance and the chief minister’s office itself was regularly monitoring the progress, he said.

The copying agency of DC Office Shimla has been computerized and integrated with the SMS Gateway.

Whenever an application for obtaining a copy is submitted for all the information relating to his application and his mobile no. will be entered into computer and when the copy is ready for delivery a SMS will automatically be sent out requesting him to collect the copy.

The service was being launched for DC Office which would eventually be extended to all the copying agencies in the state.

Secondly, e-Samadhan Software has also been integrated with the SMS Gateway and as someone submitted his grievance on SMS, a confirming receipt with reference no would be received by the complainant. The citizen will also get SMS whenever there is any action on his application and would be saved of bother to checking the status of his grievance.

The electoral roll database of Election Department had also been integrated with SMS Gateway. Now a voter only needed to send his Election Identity Card No. through SMS on phone No. 56300 and he would immediately receive details about assembly constituency, electoral roll no and location of polling booth through SMS.

Arms licences being issued from DC Offices through e-Shastra Software too had been integrated with the SMS Gateway. Whenever a licence was ready for delivery, the applicant will receive on SMS informing about the status of his licence, explained BK Aggrawal, principal secretary information and technology on the occasion.