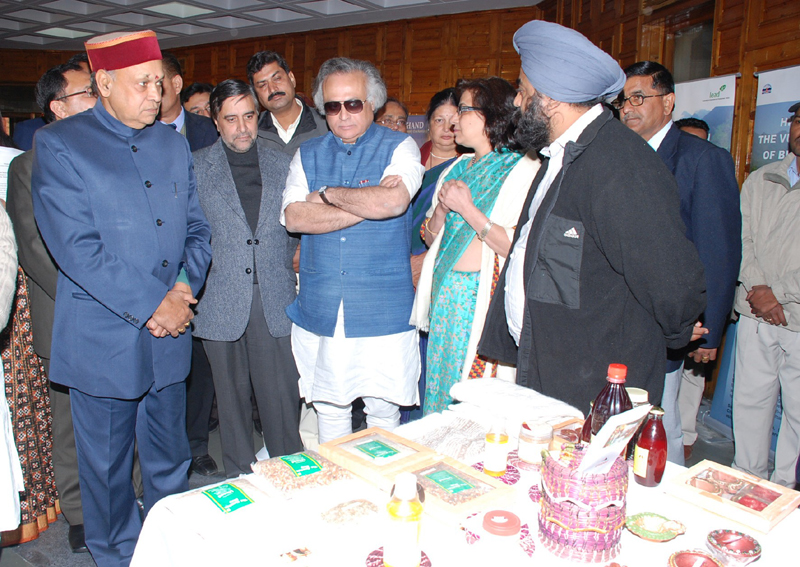 Shimla: Confronted with unpredictable weather patterns that are affecting livelihood patterns across the Himalayas, the two day chief ministersâ€™ conclave that concluded today announced the Shimla Declaration on Sustainable Himalayan Development, an environment action plan which would be periodically reviewed.

Taking cognizance of recommendations from the four thematic groups, he said they needed to be sent for incorporation in the action plan for National Mission for Sustaining the Himalayan Ecosystem.

Earlier, in his address chief minister Dhumal pointed out, that Himalayan eco-systems were experiencing multiple stresses, competing demands for urbanization, need for infrastructure development and the challenges posed by climate change, impacting glaciers, changes in precipitation patterns and season shifts have made our lives more vulnerable.â€

He advocated the need for developing institutional mechanisms for facing the challenges of climate change.

Uttrakhand chief minister Ramesh Pokhriyal Nishank in his speech asked for a policy that Himalayas be declared a plastic free zone.

The state has 12000 van panchayats who responsibly protect the forest cover but when it comes to development issues like road connectivity or laying out drinking water schemes, conservation polices come in the way, which was pitting the people against forests, he said.

He said that there needed to be a separate forest and agriculture policy for Himalayan states.

Main Altaf Ahmed, the environment minister of Jammu and Kashmir in his short address mentioned that like Himachal, environmental changes had impacted the apple crop in the valley, which was the mainstay of the economy there.

Sunita Narain, known environmentalist and director of Centre for Science and Environment (CSE), Delhi held that there was an urgent need to reinvent the economies which help the rich to be rich.

Western economies that have created the problem of climate change in the first place, need to take drastic, difficult and immediate steps to reinvent their growth. â€œWe are taking very small steps for a very big problem,â€ she said.

Counting study of receding glaciers and climate change as new sciences, Narian warned that the Himalayas would be one of the most impacted regions.

Himalayan forests have never been valued and there was no incentive for the communities to conserve them, she said.

He said the World Bankâ€™s 2010 annual world report would be on climate change as the changes coming about would have a profound impact on billions of people.