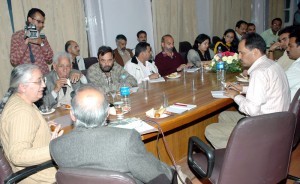 Presided over by chief minister Prem Kumar Dhumal, the cabinet took the High Courtâ€™s suggestions made in its September 3 order about draft rules for restoring timber restoration rights onboard and accepted some of them, Asha Swaroop, chief secretary said at the cabinet briefing.

Abhay Shukla, additional chief secretary (forest) who was present at the briefing added that it was decided that after notification of the TD Rules, anyone who has been allotted land after relaxation of section 118 of HP Tenancy and Land Reforms Act, 1972 would not be eligible for TD rights.

Green felling under TD rights would not be allowed and henceforth the forest corporation would supply salvage wood converted into timber under the new rules proposed.

There would be no TD rights for urban dwellers, said Shukla. The amended draft rules after notification would invite objections and suggestions from the public

Elaborating about other cabinet decisions, Swaroop said that pensionary benefits to all pensioners and family pensioners employees with effect from 1st January, 2006, on analogy of the revised central pension rules were approved by the cabinet.

Revised pensions starting from October, 2009 to be paid from November, 2009 were approved. The decision would benefit 97,300 pensioners and 15,200 family pensioners who will be get additional annual financial benefits worth Rs 340 crore while Rs 1,100 crore would be spent on their pension arrears.

The cabinet also decided to release two DA instalments due to the pensioners at the rate of 6 percent from January, 2009 and 5 percent from July, 2009, in cash.

This would deliver them additional financial benefits worth Rs 120 crore per annum, said Swaroop.

Since the decision was for all pensioners and not specific to the two constituencies where by-elections are to be held, there was no violation of the code of conduct, she reiterated.

The cabinet granted permission to award widening and improvement of 39.173 kms. of road stretch in Ranital-Kotla section of the Mubarakpur-Dehra-Ranital-Kotla road and 26.280 kms. portion of Bhawarna-Lamba Gaon stretch of Bhawarna-Lambagaon-Jaisinghpur road to Valecha-Dilip, a joint venture company consisting of Valecha Engineering Limited, Mumbai and Dilip Buildcon, Bhopal, at a cost of Rs. 62,66,80,579/-, and Rs. 56,07,17,428/- respectively. These roads are part of a World Bank funded project.