Shimla: With a task cut out, Lt General BS Jaswal, who moves to head the sensitive Northern Command said that the priority would be to contain infiltration, deal with any terrorists in a most severe manner, maintain cordial relations with the civilians and the state government, and keep the morale of the troops high so as to maintain the battle worthiness of the command. 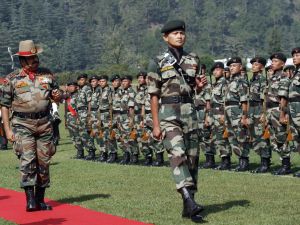 Speaking to the media today, after relinquishing charge of the ARTRAC command, the general said â€œthe Indian army was prepared to take any challenge.â€

On being questioned about the sensitivity of Indo-China border, he said, â€˜the borders there have not been demarcated and would remain sensitive.â€ However he dismissed any cause for alarm saying, â€œthere have been no incursions on the border.â€

He said that his new assignment mandated maintaining the territorial integrity of the country, which the command would do with honour.

He said that the armyâ€™s role was for the people of India, which it would live upto with a human face.

â€œWhile heading the command every effort would be made to maintain synergy with the para-military forces, the state government and the people,â€ said general Jaswal.

Training and equipping Village Defense Committeeâ€™s (VDC) in Jammu & Kashmir was proving worthy of fighting and eradicating terrorism in the state, he said

At ARTRAC, which worked as a think tank for the army, he said revolutionary and military affairs were strategized according to the needs of forces. Realistic â€˜war gamingâ€™ was one of the functions that the command was developing; devising ways to counter as well as launch electronic warfare was another area on which work was being done, he said.