Shimla: For a green future, chief minister Prem Kumar Dhumal launched the â€˜Apna Van â€“ Apna Dhanâ€™, (AVAD) a forestry scheme by planting a sapling, here today.Â  The scheme targets to encourage private landowners to plant trees of their choice that would be provided by the forest department. 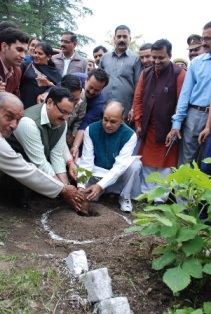 Speaking on the occasion Dhumal said that under the Jan-Jan Sanjeevani Van campaign launched last year, about 15 lakh herbal saplings had been distributed to about 14.5 lac households in the state. Such campaigns aim to make Himachal, a herbal state.

He said that the government had raised the issue about taking out habitations from the purview of wild life sanctuaries with the central government and a population of about 1.13 lakhs would stand to benefit from de-notification of 767 such villages.

He said that the states forest cover of 14369 square kilometers was estimated to be valued at Rs 1.5 lakh crore and was delivering annual environmental and other benefits worth Rs 1100 crores to stakeholders.

He said that the forest department would be protecting an additional area of 1117 sq Kms to provide natural habitat to the wild life.

Dhumal mentioned the government intended to revive traditional water bodies as well as recharge sources, for which a Van Sarovar scheme would be launched soon. Likely to be implemented under NREGA, a target of 200 water harvesting structures has been prepared in the first phase, he said.

Seized of the monkey menace being faced by the farming community, the chief minister said that three sterilization centres at Shimla, Hamirpur and Gopalpur had been able to sterilize 6160 monkeys so far. Another centre would be opened in Una soon, he added.

Forest minister JP Nadda, presiding over the function said that the forestry department would be provide about 2 crore herbal plants from its nurseries for distribution among people. â€œA massive plantation campaign had been envisioned with participation from people to make Himachal Pradesh an herbal state,â€ he said.