Having failed to get the Delhi government to abolish charging of commission from farmers over sale of agriculture produce at Azadpur Market, Narinder Bragta, horticulture minister stated that it was in violation of Agriculture Produce Marketing Act for which the state may go to court to settle the issue.

â€œIt was for the 23rd time that I met Shiela Dixit, the Delhi chief minister, earlier in the week and broached the subject of illegal charging of 8 % commission on horticulture produce, especially on apples by the fruit commission agents of Azadpur market,â€ said Bragta. 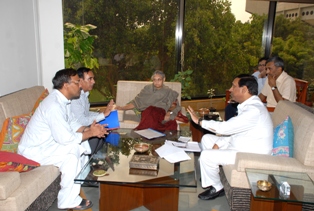 â€œUnless the issue is settled in a follow up meeting, we may be forced to take legal recourse,â€ he said. â€œNo agri-markets besides Delhi in north India, be it Punjab, Haryana, Jammu & Kashmir, Uttrakhand or Himachal charges commission from farmers on agricultural produce as it is illegal under the new laws,â€ the minister claimed. The commission is charged from buyers and not sellers, he added.

Spelling out plans for uprooting senile apple orchards and re-planting them with better plant material to obtain higher yields, he said that a Rs 56 crore proposal for covering 10,000 hectares has been put forth before agriculture minister Sharad Pawar.

Heading a forum of Himalayan states of Jammu &Kashmir, Uttrakhand, Aurnachal Pradesh and Himachal, the minister led a delegation that thrashed out issues at a high level meet with the agriculture minister, last Thursday.

We demanded separate parameters for hilly regions as cost of land development, cropping and marketing of produce are higher than that of plain regions, he said.

To save fruit crops from damage in post harvest operations, a Rs 531 crore project for setting up controlled atmosphere storages and cool chain transportation was submitted to the central agricultural ministry.

Crop insurance to cover apples in Shimla and Kullu and mangoes in Kangra districts would be soon introduced as a pilot project. â€œThis has been a long standing demand, which on being met will bring relief to the fruit growers,â€ he said.

To contain damage from hailstorms, the department was in the process of inviting global tenders for installing anti-hail guns, first on an experimental basis and only if it succeeds would it be expanded. The central ministry has already allocated Rs 3 Cr for introducing the new technology.

The minister disclosed that a fruit carton manufacturing unit at Gumma in the government sector had become a white elephant as its accumulated losses had mounted to Rs 73 crore. The plant stands closed and the staff has been re-located to other PSUâ€™s.

Accumulated losses at HPMC, another PSU stood at Rs 37 crore but the government was making efforts to revive this company. Orders of sale of juice products had been procured form Indian Railways and talks were on with Indian Army, Commonwealth Games management and others. The government was also open to private participation in HPMC operations, he said.