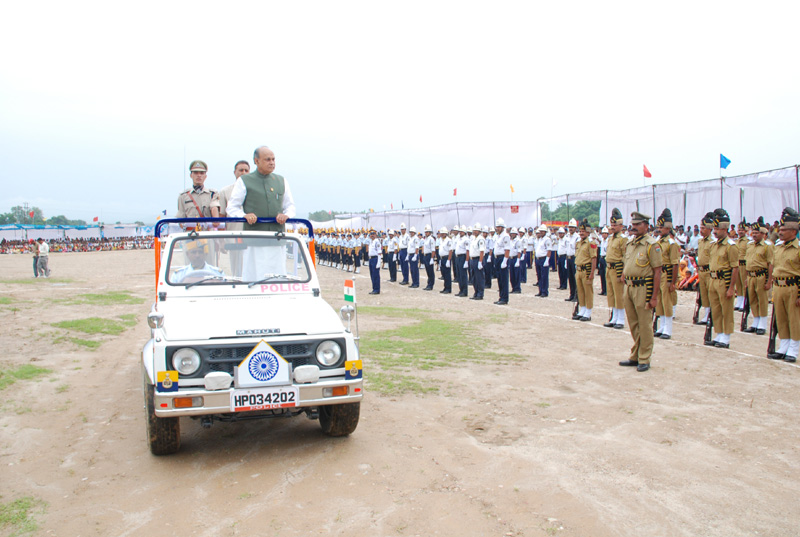 Shimla: 63rd Independence Day was celebrated with great enthusiasm throughout the State, today. Unfurling of National Flag, march past by contingents of police, home guards NCC and school children, cultural programmes were main attractions of the celebration. The functions were organised at State, District and Sub-Division level to mark the occasion.

The State Level function was organised at Fatehpur in the interior of district Kangra, where Chief Minister, Prof. Prem Kumar Dhumal, unfurled the National Flag and took salute at an impressive march past by contingents of police, home guards, NCC and school children commanded by Shiv Kumar Sharma, DSP.

Chief Minister announced implementation of 5th Pay Commission recommendations based upon the Punjab pattern to the regular employees of the State Government with effect from September, 2009;Â  release of six percent Dearness Allowance installment from January, 2009 to be paid in cash and UGC pay scales to all eligible college and university teachers from September 1, 2009. He announced regularisation of contractual and daily wages completing 8 years of service on 31st March, 2009; enhancement in the â€˜Samman Rashiâ€™ of veteran freedom fighters from existing Rs. 2,000 to Rs. 4,000 per month and enhancement in the â€˜Samman Rashiâ€™ being paid to the widows and unmarried daughters of Freedom Fighters to Rs. 3,000 per month. He also announced enhancement in the daily allowance of the Home Guards from existing Rs. 150 to Rs. 170 to be effective from September 1, 2009.Â  He also announced enhancement in the monthly honorarium to Gram Panchayat Chowkidars from Rs. 800 to Rs. 1,000.

Chief Minister announced construction of three vital double lane tunnels, Uttrala-Holi to connect district Chamba with district Kangra; Bangana-Dhaneta and Ghatasani-Telang in district Kullu at a cost of Rs. 270 crore with total length of 9 kms. which will shorten distance by tens of kilometers.

He also announced District Level Status to Krishan Janmashtmi at Nurpur from next year onwards.

Prof. Dhumal also honoured Shri Jai Sen Chauhan, Additional Secretary SAD, with the â€˜Civil Seva Puruskarâ€™ instituted by the State Government to award officers and officials of the State Government rendering exemplary services in addition to their assigned duties and responsibilities. A cash prize of Rs. 51,000 was given to Shri Jai Sen Chauhan, which he donated towards Chief Ministerâ€™s Relief Fund.

He also gave away prizes to individuals and Panchayati Raj Institutions under Maharishi Valmiki Sampoorn Swachhata Puraskar. Gram Panchayat Mindhal in Pangi block got first position in the district and received a cash prize of Rs. 3 lakh.

Pahalu gram panchayat was given award by the Minister for having been declared first in the district in Total Sanitation Campaign. Dalshera, Barahlari, Gauna, Ree, Dedwin Tikkar and Uhal panchayats were also rewarded under TSC..Pushpa Thakur, Dinesh, Manju and Rita for their meritorious achivements in athletics and Vandna Devi in Kabdi at national level were also honoured by the Minister.

Speaking on the occasion, Sat Pal Singh Satti, Chief Parliamentary Secretary said that State Government was according top priority for social sector and added that social security pension had been enhanced to Rs. 330 besides sanctioning this pension to 27,757 new eligible persons in the State. He said that over 2.50 lakh eligible persons had been benefitted in the State under social security pension so far.

Presiding over the district level function at Keylong, Virender Kanwar, Chief Parliamentary Secretary said that a plan outlay of Rs. 70.08 crores has been made for Lahaul-Spiti district during current financial year under Tribal Sub Plan for various developmental activities of the area.