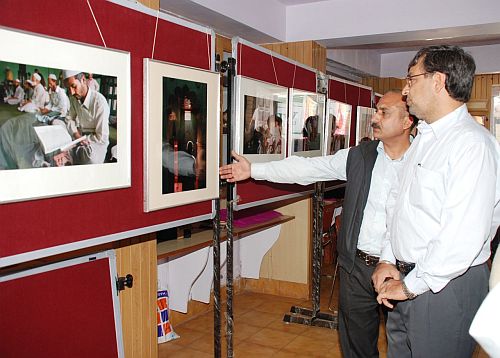 Shimla: Deviating from shooting landscapes and scenic views, Neeraj Sharmaâ€™s photo-exhibition at the Rotary Hall that was inaugurated today by information and public relation secretary Ram Subhag Singh, captures the unusual moments in the usual life of Shimla and its residents.

Other than being a tourist place, a state capital, the multi-cultural, multi-religious, urban-rural blend of this city provides such variety of subjects that one can go on freezing any number frames,,â€ says Sharma.

Coinciding with the Summer Festival, the exhibition is a collection of frames which the shutterbug has been picking out from the lives of ordinary people in Shimla, for about a year.

It is always a challenge to capture the right moment, freeze the ambience, the expression in a light and shadow cast to tell a story, he says.

Born at Ambala, the Chandigarh educated Sharma took to clicking when he was just nine. â€œIts been such a long journey,â€ says the 37 year old veteran. Other than having held exhibitions at All India Fine Arts Academy, Amritsar and Rose Festival, Chandigarh, the photographer has also contributed towards Incredible India campaign and even published a coffee table book on Thailand and South East Asia.