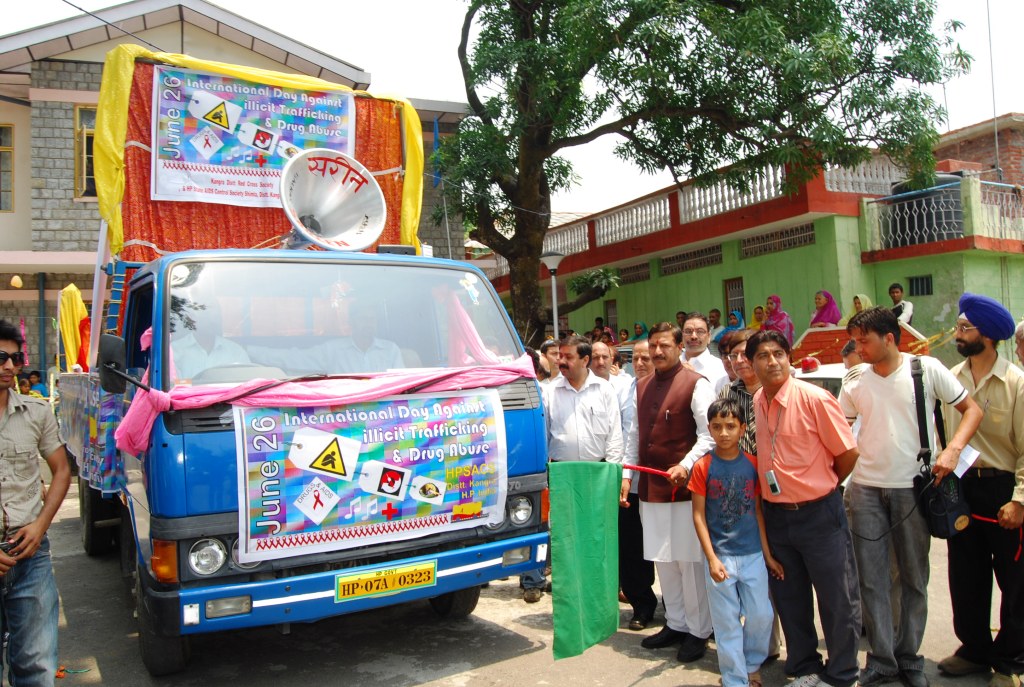 To mark the International Day against Drug Abuse and Illicit Trafficking, an awareness rath was flagged off by the Health minister from Ichhi to sensitize the people in general and the youth in particular, to the menace of drugs. The awareness drive organized under the aegis of Himachal Pradesh State AIDS Control Society and Kangra District Red Cross society, consisted of mobile exhibition, musical programmes and quiz at Kangra, Palampur Dharmashala.

About 20 crore people use drugs worldwide. Drug abuse leads to high risk behavior which is a leading cause of HIV infection. There are several emerging Intravenous Drug Use -HIV epidemic hotspots in north Indian states. According to sentinel surveillance data from 2006, the prevalence of HIV among drug users is 10.0% in New Delhi, 13.8 % in Punjab and 17.6% in Chandigarh.

India is wedged between the worldâ€™s two largest areas of illicit opium production, the Golden Crescent and the Golden Triangle, which makes India a destination and a transit route to developed countries for opiates produced in these regions. According to the National Survey on the Extent, Pattern and Trends of Drug Abuse in India 2004, Alcohol, cannabis and opiates are the three most common drugs of use.

According to a survey by Department of Social Security and Women and Child Development Punjab, 66 per cent of the school-going students in the state consume gutkha or tobacco; every third male and every tenth female student has taken drugs on one pretext or the other. And seven out of 10 college-going students abuse one or the other drug, tow thirds of its rural household has at least one drug addict.

Drug abuse is a problem in the state with cannabis cultivation pockets existing. HP has the second highest prevalence of alcohol users (37.3%) in the country; Cannabis use is seen predominantly in HP (60.8%).

Drug abuse has a detrimental impact on society. It has led to increase in the crime rate. Addicts resort to crime to pay for their drugs. Drugs remove inhibition and impair judgment egging one on to commit offences. Women face greater problems from drug abuse ranging from domestic violence and infection with HIV, as well as the financial burden. Most of the domestic violence is directed against women and occurs in the context of demands for money to buy drugs. Drug abuse is linked with corruption, terrorism and violence threatening the very stability of governments. Children start on drugs for a number of reasons, from curiosity, recreation to the need to cope with stress but drug abuse and addiction lead to a complex set of social, medical and economic problems with serious implications. In India, by the time most boys reach the ninth grade, about 50 percent of them have tried at least one of the gateway drugs. Drug use starts with experimentation and casual use and gradually increases to dependence. Physically, the body develops also tolerance for it. This can lead to increases in consumption, which eventually leads to physical dependence. It is easy to say No than to return from the path of drug addiction.

Various social organizations are working to fight this menace and raise awareness among youth on HIV and Drug related problems. CORD is doing a intervention project among drug users in the district to address this problem in collaboration with HP State AIDS Control Society.

Sub-Saharan Africa, is the hardest hit region, and home to two-thirds (67%) of people living with HIV but only 11â€“12% of the worldâ€™s population. Most children with HIV live in this region (90%). Almost all of the regionâ€™s nations have generalized HIV epidemics with national HIV prevalence rate greater than 1%. 9 countries have prevalence of more than 10%. South Africa has the highest number of people living with HIV in the world (5.7 million), and almost one in five South African adults is HIV-positive. Swaziland has the highest prevalence rate in the world (26.1%).

In Himachal Pradesh, the first case of HIV/AIDS was detected in 1992. As on 31st March 2009, there are 3467 PLHIV in HP, of which 844 are in Kangra. District Kangra is a low prevalence district, with < 0.25% prevalence in antenatal group, however we need to address it at an early stage.

The Integrated Counseling and Testing Centre (ICTC) at Dharamsala, established in March 2002 is the oldest in the state after the Medical College Shimla. ICTC are also located at Civil Hospitals Palampur, Kangra, Dehra and Medical College Tanda and over 14600 persons have availed free HIV counseling and testing facility in the District. Over 33 outreach counseling and testing caps were held during the present year by counselors to offer services to those who cannot access the ICTCs.

Free condoms are being distributed through Indian Oil Petrol pumps and civil supply outlets in addition to all health facilities.