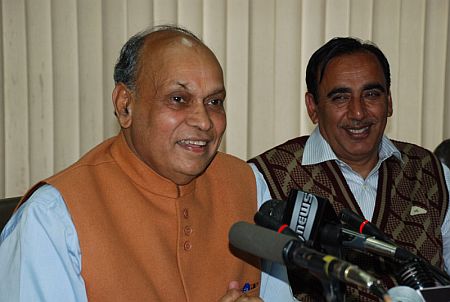 Shimla: Terming it as a vote for stability, Chief Minister Prem Kumar Dhumal who took out time after a cabinet meet to speak to the media said that the UPAâ€™s victory in the just concluded elections was a definitive mandate against blackmailers spearheaded by the leftists.

He said that congress made gains in those states where BJP was not present. Making a state by state case, he said that in West Bengal and Kerala, the blackmailing tactics of the left parties was thoroughly exposed.

In Tamilnadu and Andhra Pradesh, absence of BJP and weakness of the third front worked to the advantage of UPA, he said.

It was not much of a debacle for BJP as its seats came down from 136 to 116, whereas many other partyâ€™s including the left partyâ€™s suffered their worst defeats in their bastions, said Dhumal.

A troubled Rs 64 crore water augmentation supply scheme for the capital failing to meet its projected capacity has got the Himachal government to order an inquiry, suspecting that sub-standard pipes have been used to lay the pipeline for carrying the water.

Dhumal said that the Giri River augmentation scheme for Shimla, which originally was budgeted at Rs 40 crore not only overshot its estimates to Rs 64 crore but where it should have been adding 20 million litres (MLD) to the daily supply, only 8 MLD are reaching the city.

The government has ordered an inquiry as it has come to the notice that the pipes ordered from Kolkatta are not suited to hill specifications, he said.

Those found guilty in laying a wrong design and using material not suited to the topography would be punished, he added.

The scheme was scheduled to be commissioned in December, 2007 but it still is to meet its design specifications of providing 20 MLD of water, he said.

Igniting forest fires to be made a criminal offence

Responding to a question about forest fires causing immense damage to the green cover and harming the environment, the chief minister said that igniting forest fires would be made a criminal offence.

â€œIn order to obtain a new pasture cover, it was noticed that many people set fire to dry grasslands which are causing many forest fires, he said. It being the breeding season for most birds, a lot of avifauna is also being destroyed in such fires, he added.

The government had set up 20 control rooms and special teams had been constituted to the fire-fighting, he said.

Rural roads to be given priority

The chief minister disclosed that the government had emphasised on giving priority to rural roads at a review meeting of PWD held earlier in the day.

For repair of 770 Km of such roads, Rs 50 crores had been sanctioned and the department has been asked to identify another 700 Kms of road length needing urgent repair for which funds would be provided, he said.

The government had bought bitumen in advance and laying of tar on 1200 Kms of new roads was being carried out.

Under the PGMSY scheme, a length of 3000 kilometers of new roads stood approved and were being executed, he added.