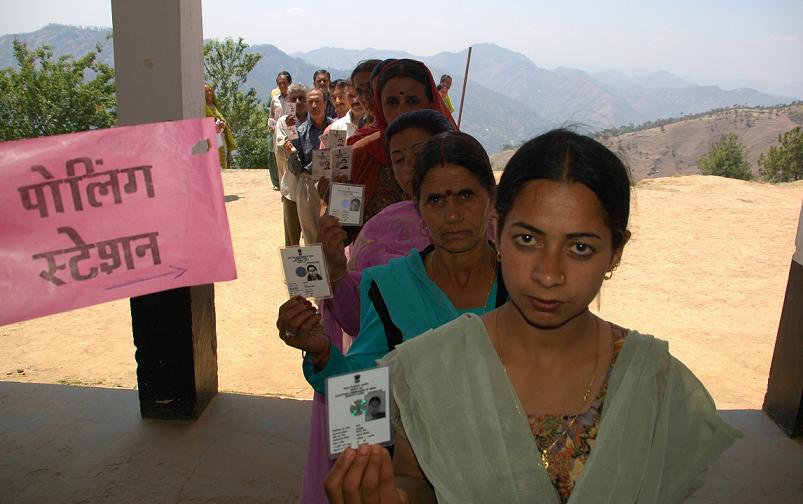 Shimla: Polling was brisk in some places and moderate at others throughout the state that concluded peacefully on Wednesday.

Election commission sources said that preliminary data indicated that the turnout was about 57 percent, even as poll officials were busy compiling the final data and transmitting it back to a converging office with the respective returning officers.

Chief electoral officer Anil Khachi said, â€œthe poll process concluded in a peaceful manner and there was no reported incidence of poll related violence from any part of the state.

Preliminary data compiled indicated polling was high in Hamirpur at 62 percent, followed by Mandi at 60 percent, in Kangra it was 52 percent and Shimla recorded only 50 percent of voting.

In some place people in protest of their problems did boycott the poll. At the one polling station in Bara Bangal where the poll party was air dropped by helicopter no voter cast his vote.

In the adjoining Chota Bangal area, at several polling stations also the people chose to keep away from the elections.

The people of these areas in Kangra constituency are demanding to be brought outside aÂ  protected sanctuaryÂ  area in the revenue circle because the sanctuary status is restrictive on their livelihood pattern.

In Mandi constituency, voters of Vashist village in Kullu did boycott the elections in protest over a micro-hydro project coming up in the area.

At two polling stations under Renuka assembly segment in Sirmaur, voters boycotted the elections by choosing to keep away in protest of a dam project proposed in the area that is to feed the water supply for an ever expanding Delhi metropolis.

As the booths opened up at 7 a.m. many early birds decided to combine their morning walk with a stop at the voting counter and had done with the days business while others were still in bed in the cities.

Landlocked Dodra-Kawar, in the interiors of Rohru assembly segment that is represented by former chief minister Virbhadra Singh witnessed brisk voting with preliminary data indicating that it had crossed the 60 percent mark by the end of the day.

Among the senior citizens Bhadru, who at 127 is perhaps one the oldest voters in the country, rode a horse to reach the polling station at Katiya Majhar in Kasumpati assembly segment and cast his vote.