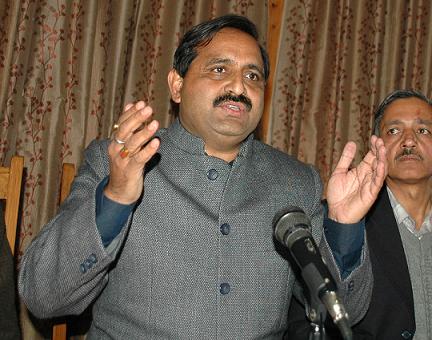 Shimla: â€œMadan Lal is a tourist, who has contributed nothing to Himachal either in sports or in public life,â€ is how BJP reacted to congress declaring the former cricketer as the party candidate for Hamirpur where he is pitched against Anurag Thakur, who won the seat with a record margin in a by-election, just a year ago.

Randhir Sharma, BJP spokesperson told mediapersons on Wednesday that despite being a former international cricketer, the congress candidate would be rejected by the people as he was a non-entity in the state and had made no contribution towards its betterment.

Congress party was in the habit of para-trooping candidates on the electorate, said Sharma, â€œwhich even congressmen were finding hard to digest and some have already raised the banner of revolt.â€

The spokesman claimed that after Madan Lalâ€™s grandfather moved out of Hamirpur, neither he nor their family ever bothered about Himachal, a fact that the people know very well.

People of Hamirpur cannot be taken for a ride as they can see through this new found love for the abandoned home state, he said.

Speaking about the alleged rape of deaf and dumb girls at a school in a Shimla suburb, the BJP spokesman said that congress was stooping low by trying to draw political mileage from such an unfortunate incident.

It only showed that the party had run out of issues where as records showed that the NGO which ran the deaf and dumb institute had been receiving patronage and funds from some congress leaders, he said.

He alleged that to benefit Prerna Welfare Association – the NGO which operated the school, the previous congress government had not set up a rehabilitation centre for disabled children in Hiranagar whereas the social justice and empowerment department had marked 10 bighas of land for the institute in 1989.