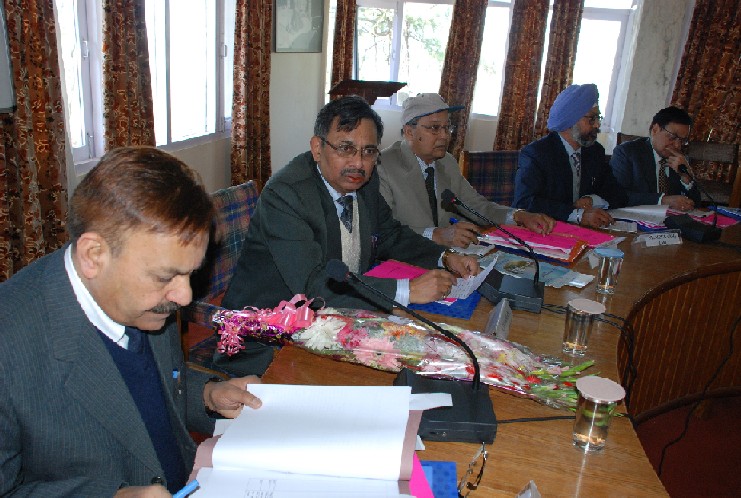 Shimla: With Rs 8,000 crore marked for flood management program under the 11th Plan, the Ganga Flood Control Commission (GFCC) has asked states to submit result oriented schemes that could get priority funding.

AK Bajaj, member GFCC, presiding over a meet of the commission here on Monday stated 40 million hectares of land in the country was flood prone of which 50 % was in the Ganga basin.

He said that the total geographical area of the Ganga basin was 86.14 million hectares and 26% of the total flood prone area in the country spread over eleven States, divided in 23 sub-basins was part the basin.

An amount of Rs 8,000 crores has been marked for â€˜Flood Management Programmeâ€™ to provide reasonable degree of protection to the flood affected areas, said Bajaj.

States affected by floods should frame the schemes and get them appraised from concerned agencies so that could get priority in allocation of funds.

A comprehensive flood management programme has been formulated for the eleventh Five year plan with a principal objective to provide immediate and adequate flood assistance to States.

RN Sharma, chief engineer of irrigation and public health Himachal emphasised upon channelization of major rivers passing through the state, which were causing extensive damage during floods.

Major projects for flood control in Himachal Pradesh include the flood protection works on Giri Bata River in Sirmaur, a tributary of river Yamuna. About 220.5 hectare of land had been saved by constructing embankments in vulnerable stretches of the at a cost of Rs 5.75 crore.

Another 1538 hectare of land of 20 villages are proposed to be flood protected for which GFCC has approved Rs 34.67 Cr but the was awaiting investment clearance from Planning Commission, he informed.

A detailed project report for protecting 687.05 hectare of land and 887 houses by canalization of tributaries of Bata river involving an investment of Rs 14.93 crore is up for approval from GFCC, Patna, said Sharma.

He revealed that River Pabbar another tributary of River Yamuna is proposed for channelization for which a DPR of rupees 55.62 crore has been prepared for protection of an area of 378 hectare besides about 2000 houses.

Sharma said Swan River in Una, which was earlier known as River of Sorrow, has now been converted into the River of Prosperity since an area of 2260 hectare has been proposed for flood protection in the first phase-1 of the ambitious project being funded by NABARD.

In the second phase, the project aimed at protecting another 5000 hectare which is proposed to funded under the Flood Management Programme.

Yet another project on River Sutlej is â€˜Canalization of Seer Khudâ€™ in Bilaspur district, which proposes to protect under 20 hectare of land and is likely to be included in the 11 five Year plan, said Sharma.

Besides these project, the IPH department was executing 62 different flood protection projects with a budget of Rs 93 crore, he informed.

As many as thirty renowned scientists and experts drawn from across the country the meeting, which included, the state representatives from Jharkhand, Rajasthan, MP, Haryana, I.R.I. Rourkee, NIH, Patna, RDSO and Remote Sensing Application Centre Lucknow besides members from Ministry Of Water Resource and Ganga Flood Control Commission.