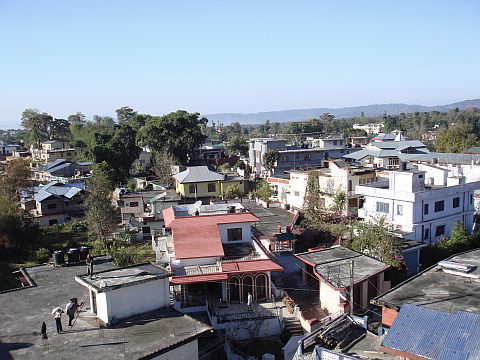 PALAMPUR: Despite the fact that the entire Dhauladhar Range in Himachal Pradesh falls under the most sensitive earthquake prone areas of the country, haphazard and unplanned buildings and residential construction is going on unchecked. In past five years the Kangra district, particularly Palampur and Dharmshala towns have turned into a huge concrete jungle.

After 2001 earthquake in Gujarat the government of Himachal Pradesh had taken serious measures to regulate the construction activities in this region and also brought all important towns of Kangra district within the purview of Town and Country Planning Act. Surprising to know is that hundreds of buildings including residential houses and multi-storeyed complexes in the district have come up without the prior approval of town and country planning authorities.

There are several hotels and shopping malls with multi-storeyed structures,Â  constructed in gross violation of rules laid down by the town and country planning department. In many cases the site plans are not approved by the town and country planning authorities but buildings have come up. Government does not know who has accorded sanction for the construction of these buildings. Even the defaulters have managed electricity and drinking water supply connections.

It seems that there is none to check such illegal construction, which is extending and open invitation for a major disaster like Gujarat. Not only private parties but the semi government and government agencies have also not followed the norms laid down for the construction by Town and Country Planning Department. Number of buildings constructed by Municipal Councils and Public Works Department and other government agencies have openly flouted the norms laid by theÂ  TCPD. It is most surprising that till date TCP has failed to initiate any action against defaulters. Even in one of the cases TCP has also not followed the directions issued by the Himachal Pradesh High Court and allowed the construction to go a head.

The entire Dhauladhar range in Himachal Pradesh falls in Zone five, the experts of Seismology Department of Roorkee University have recommended earthquake proof constructions for this region. But it is a sad state of affairs that neither Town and Country Planning Authorities nor state government has followed these recommendations and measures suggested by these experts. Most of the building maps approved by the TCPD particularly for Palampur and Dharmsala towns lack such norms and huge concrete jungle have come up here, giving open invitation to a big tragedy.

The Kangra earthquake of 4 April 1905 in the north-west Himalaya was the first of several devastating 20th century earthquakes to occur in northern India. The then Punjab Government estimated that more than 20,000 of its 375,000 epicentral population was killed, and that 100,000 buildings were destroyed by the earthquake. Farming was disrupted by the loss of 53,000 domestic animals and extensive damage to a network of hillside aqueducts that had been constructed over many generations.

The economic costs of recovering from the earthquake were estimated at 2.9 million (1905) rupees. Although this earthquake is not the only severe event known in the western Himalaya, it has the largest death toll and is the first to have occurred since the development of instrumental seismology. It was considered as one of the four great Himalayan earthquakes to have occurred in the past 200 years, subsequently estimated for the magnitude of the event range from M = 8.6 (ref. 5) to Ms = 7.5 (ref. 6).