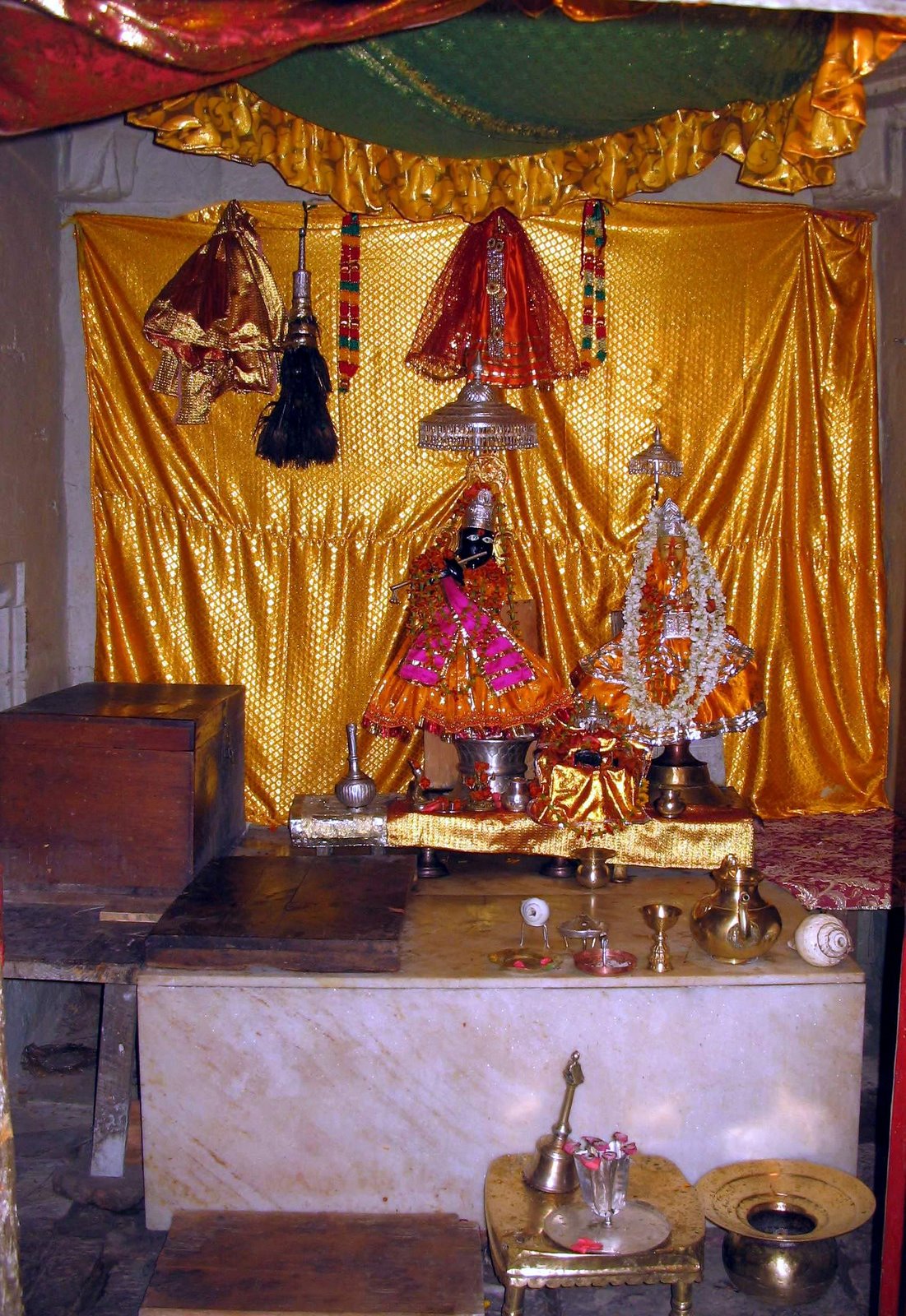 Bounded by Dhauladhar and Pir Panjal ranges on either side, the Kullu Valley is often referred to as Valley of Gods or Eden of Apple. In old Indian texts such as Brahmand Puran, Brihatsamhita and Markandeya Puran, this area is mentioned as â€˜Kulantapitha’ which famous traveler Penelope Chetwode has translated as the End of the Habitable World – as anyone who has stood at the top of the Rohtang Pass, bounding Kullu and Lahul, will understand.

May I initiate this blog entry, with the description of three prominent temples near Bhuntar Airport in Kullu Valley. They are Khokhan temple of Lord Brahma; Dayar temple of Lord Vishnu and Bajaura temple of Shiva (Mahesh).

Adi Brahma Temple of Khokhan (Near Bhuntar)
The unique temple of Adi-Brahma is located close to Bhuntar on a link road starting from Shamshi moving towards the village of Khokhan at about same elevation as of Dayar temple of Vishnu across the valley. In Hindu Pantheon, there are a large number of temples devoted to Vishnu and Shiva but very few to Brahma. Hence the Adi-Brahma temple built in wood and stone at Khokhan is of great importance. In Himachal Pradesh, another Adi-Brahma temple is at Tihri (Uttarsal) in Mandi district.

At Khokhan, the Adi Brahma has one ashta-dhatu, eleven silver and two brass mohras fixed in the rath. The temple is made in wood and stone in a peculiar style.

Local folklores indicate that there have been tiffs over supremacy between the temples of Adi Brahma and Dayar located on the either side of the valley.

Pagoda Style Temple of Trijugi Narayan at Dayar (Near Bhuntar)

From Bhuntar (on National Highway 21) a link road bifurcates on the left bank of Beas to Dayar village. The Pagoda Style Temple of Trijugi Narayan at Dayar is saddled on a ridge and clearly visible from Bajaura Shiva temple and the NH 21.

The pagoda style of a temple is often associated with lord Buddha. This is one of the first few temples depicting influence of Buddhism in the region which grows more and more as one moves further into Himalayas and trans-Himalayas (Lahul and Spiti districts).

In the hills, Vishnu is often referred to as Daridra Narayan or protector of downtrodden. Vishnu is more popular in rural areas and agricultural community with as many as 65 Narayans in Kullu valley alone.

The temple of Dayar made of stone and wood has an idol of Vishnu about four feet in height along with smaller metal idols of Buddha. M.R. Thakur in his book, “Myths, Rituals and Beliefs in H.P.” mentions,”It is remarkable to note that the presiding deities in chief areas of the Pradesh are among Vishnu, like Raghunath in Kullu, Madhav Rao in Mandi,Laxmi Narayan in Chamba, Murli Manohar in Sujanpur, Bansi Gopar in Bilaspur and Parshu Ram in Renuka (Sirmaur). The following of Vishnu may be gauged by the reverence of large number of Narayans and his nine incarnations – Matsya â€˜the fish’, Kurm â€˜the tortoise’,
Varah â€˜the boar’, Narsimha â€˜the man-lion’, Vaman â€˜the dwarf’, Parshu Ram, Rama, Krishna, Buddha and the tenth would be incarnation Kalki.”

The temple of Basheshwar Mahadev (or Vishvesvara Mahadev) is located at Bajaura on National Highway 21, about four kms from Bhuntar Airport. There are about twenty recorded stone-temples in Kullu of which the Bajaura temple of Lord Shiva (Lord of Universe) is the largest one. The famous archeologist, Dr Vogel has described this temple in detail in his report to the Archaeological Survey of India (1909-10). He says,”The excellent workmanship of the large bas-reliefs and, in fact, all the sculptural decoration on Bajoura temple, points to an early date”.
Mandanjeet Singh, an Indian art historian, in his book Himalayan Art (UNESCO, 1968), opines that the temple was built in eleventh century. The temple looks a bit squat with an unusually flat Shikhara. The outer surface of the temple is covered with the carvings.

There is no pillared hall attached to this temple though such adjuncts are common in Mandi temples. The sanctum of the temple called Garbha Griha is approached directly by an open doorway on the east side of the temple and contains the linga of Shiva set in the yoni of his female power (shakti), Devi, the daughter of Himalaya.

There are magnificent carvings of gods on the remaining three sides of the temple. The niche to the west has a standing figure of Vishnu.

The niche to the south has a beautiful Ganesha.

And the side facing north (the eternal snows of Lahul) has Devi Durga with her eight arms wielding different kinds of weapons.

Exquisite carvings on the bulging tower of temple.

No animal sacrifice is made at the Bajaura temple.

The lower part of temple is mainly made up of foliage patterns.

A peacock seen in the carving here.

Such carvings are there at the base/lower side of the temple.

Sanjeeva Pandey is a forester, environmentalist and an active conservationist who was instrumental in attaining the World Heritage Status for Great Himalayan National Park (GHNP) in Himachal Pradesh. He lives in Shimla