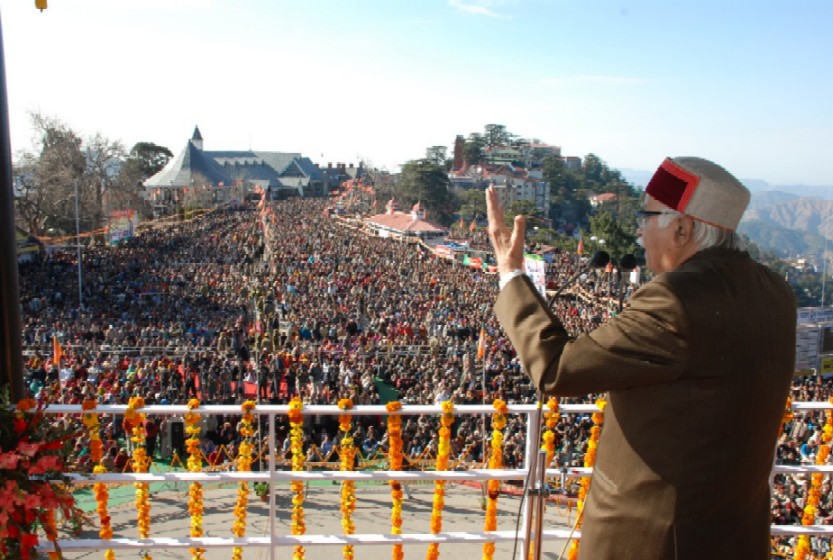 Shimla: Taking the UPA government to task over handling terror, LK Advani, senior BJP leader said that while the government had come around to enacting stringent anti terror laws but votes bank politics needed to shunned to enforce such laws.

Speaking to a large public gathering assembled to mark BJP’s one year in office in the state as well as the ‘Vijay Sankalp’ day on The Rigde, leader of the principal opposition held out that the prime minister needed to spell out how he intended to deal with Pakistan in the last few months of its tenure. “The people of India have a right to know this,” said Advani.

He said unlike congress which had adopted a hostile attitude to enactment of POTA in 2002, BJP fully supported the two anti-terror bills which the UPA government brought forth.

“Mumbai blasts have forced the UPA government to enact a strong anti-terror law even though they had repealed POTA with perverse pride,” said Advani.

While the ruling alliance had come around on the anti-terror law, but it has stuck to its policy of no-turn as far as vote-bank politics is concerned, he quipped.

He said the entire polity was with the government over the terrorist attack in Mumbai but the UPA government looked the other way when a cabinet minister spoke Pakistan’s language about some alleged conspiracy behind killing of a police officer.

He held that to safeguard its vote banks, the government has refused to implement the Supreme Court’s decision on death sentence for Afzal Guru, convicted for his role in the terrorist attack on Parliament on 13 December 2001.

Likewise the government has refused to implement the Supreme Court’s directive on an effective law to stop large-scale infiltration of Bangladeshis into India, he added.

Commenting on the Jammu & Kashmir elections results, he said. “you cannot any longer ignore BJP. We will not keep quiet if there is a repetition of the Amarnath fiasco or a soft approach in dealing with separatists and terrorists or if legitimate interests of Jammu and Ladakh are neglected.”

Speaking about the year going by Advani termed it as the worst year in terms of terrorist violence, a time where the aam aadmi was hit hardest by unprecedented price rise and a year with one of the worst economic recessions where lakhs have lost jobs and thousands of businesses have shut down.