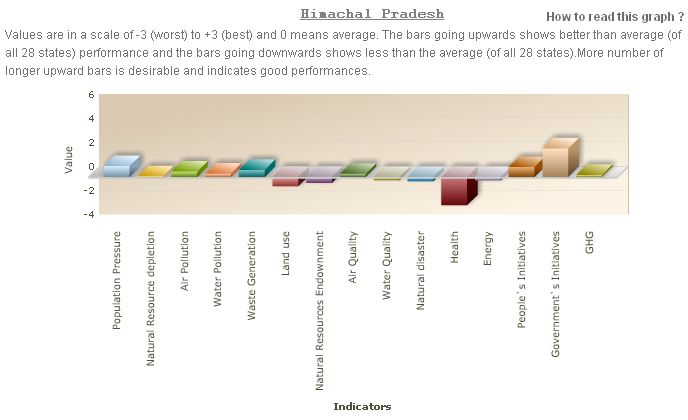 Shimla: Himachal Pradesh scores highest on the “Government’s Initiative” indicator and is also one of the leading states in the ranking of The Environmental Sustainability Index (ESI). On Thrusday, December 18, 2008, the Centre for Development Finance (CDF) at the Institute for Financial Management and Research (IFMR), developed a comprehensive environmental sustainability index (ESI) for Indian states.

The ESI tracks the environment performance of 28 states and projects their ability to protect the environment in future. The rankings are relative and measured on a scale of 0 to 100, allowing states to see how well they are doing in comparison to other states. Ranking of each state as well as comparison with any number of states can be made at their website www.greenindiastandards.com.

The Award for ‘Green States’ was also give to 5 select states who had performed well on various aspects of Environmental Sustainability, namely: Himachal Pradesh (for best governmentâ€™s initiative), Manipur (for best peoplesâ€™ initiative), Chhattishgarh (for least polluted water), Sikkim (for best conservation of natural resources) and Meghalaya (for best air quality).

However, looking at the Indicator graph we see that Himachal is very poor in â€˜Healthâ€™ and needs to take some actions to improve its performance in this field, I guess ESI will surely prove very helpful to all states and will indicate them their alarming fields.