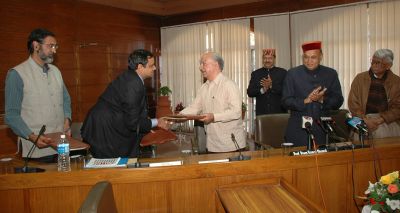 It may be mentioned here that Governor of Himachal Pradesh had signed an MoU with Indian Hospital Corporation Ltd on Sept 5, 1992, when Shanta Kumar was the chief minister of the state to establish a project Vivekanand Institute of Medical Sciences and Research and in pursuance to it on Oct 19, 1992 the Vivekananda Medical Care, Education and Research Trust was made.

However, in terms of an MoU signed on Sept 10, 2000, amongst six individuals a Trust was created on Sept 11, 2000 called Vivekanand Medical Research Trust for setting up a medical research institute, medical college and multi-specialty hospital at Palampur.

The supplementary MoU signed on Wednesday stated that it will now set up a super speciality hospital with an associated medical college and nursing college at Palampur, land for which was given by the government of Himachal Pradesh on a token lease money.

Talking to newspersons after the signing of the MoU, Shanta Kumar said that he had been nursing the vision of setting up the super speciality hospital at Palampur since 1990-91 and though the people had contributed Rs 25 crores for it, the money could only be utilized for setting up a yoga and natural cure centre â€œKaya Kalpâ€™, in the first phase which was inaugurated by Swami Ramdev and had created a name for itself in as much that persons from as many as 40 countries had visited it for training and treatment.

Jai Prakash Gaur, Chairman Jaypee group, on the occasion said that the hospital would provide free services to the poor and would live upto the objectives spelt out by the trust.

Admitting that the second phase of the project in setting up the super speciality hospital could not mature for want of funds, as being a small state the people of Himachal Pradesh could not contribute the amount that was required, he said that now that the Jai Prakash Sewa Sansthan had come forward, the project would be completed in two years time and be run on a non profit bases, while the BPL families would be provided free treatment.

He said that of the 15 trustees, nine would be from Jai Prakash Sewa Sansthan, five from Vivekanand Medical Research Trust and principal secretary (health) would be the nominee of the state government on it.

â€œHowever, the over all looking after of the hospital, medical college and nursing college will be done by the Vivekanand Trust, whereas the Jai Prakash Sewa Sansthan will arrange the funds for day to day running and the state government will provide any requirements that may be needed in the futureâ€, said Shanta.