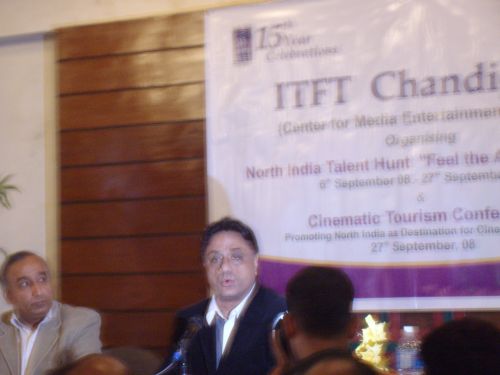 A North India Talent Hunt is being organized by ITFT, Chandigarh from 6th to 27th September all through North India in order to recognize the talent pool here. ITFT Chandigarh, who would be completing its 14 years and is recognized by Punjab Technical University would also be organizing a Cinematic Tourism International Conference & Awards at Hotel Mountview, Chandigarh.

The auditions at Shimla would be held on 20th September in the TT room, HP University at Shimla from10 am to 9 pm. Candidates who have completed their 12th standard and are below 27 years of age can opt for the auditions. Semi finals would take place on 21st September and finals on 27th September in Chandigarh. Maximum of 40 kids would be enrolled through these talent hunts while 4 candidates-2 boys and 2 girls would be provided with complete scholarships for bachelors and post graduation course at the institute. The finals would be judged by Harry Baweja, Manmohan Singh, Kanwaljit singh and Deep Dhillion.

Harry Baweja, Co-Chairmen of the institute said that the “focus isn’t on making actors and actresses but to provide degree courses in Media and Entertainment. Where a lot of jobs would come up in media and entertainment sector, the need is to prepare the generation for them.Centre of Media Entertainment Studies is being introduced so that the students can discover their field of interest and avail them easily.” Focusing on cinematic tourism he added “Tourism and Cinema are inseparable. Films are influencing tourism and such destinations in north India need to be explored and promoted fully.”[/lang_en][lang_en]

When asked why most of the films were being shot outside India, Harry Baweja said that the governments abroad facilitated the film crew with different incentives and getting permissions are hassle free and convenient. He pointed out that where India has beautiful locations, the infrastructure basically lacks making it a problem for any shootings. About his experience about shooting in shimla, he praised the system for supporting him. “Only the rates were increased overnight without any reasons”, he added.

On 27th September, on the event of Cinematic Tourism International Conference & Awards, a 9 square meter free stall would be provide to the north Indian states including Himachal for promotion and identification of locations in order to promote cinematic tourism on a common platform. Also, 15 minutes would be given to each state to conduct a multimedia presentation in order to introduce the film fraternity with cinematic locations in their respective states.