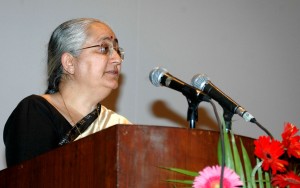 Shimla: Asha Swaroop moving out as secretary of information and broadcasting from Delhi, today took over as the new chief secretary of Himachal Pradesh.

Swaroop, who assumed charge in the afternoon said, “power and tourism would remain a priority in the state. However, there was a need to consolidate on the gains made in the education and health sector. Efforts would be made to achieve it,” she said.

Swaroop is a 1973 batch IAS officer from Himachal Pradesh cadre and has her service period till 2010. She is the second women Chief Secretary of HP after Rajindra Bhattacharya, who had held the top post during the earlier tenure of Chief Minister Prem Kumar Dhumal from 1998-2003.

She replaces Ravi Dhingra, a 1972 batch IAS officer, who has proceeded on central deputation to join as Secretary Inter-State Council in the ministry of Home Affairs.