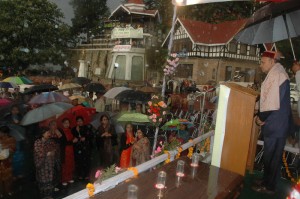 The state joined nationwide celebrations with the 150th anniversary of first freedom movement by lighting 150 lamps and observing 57 seconds silence at 18.57 hours so as to pay tributes to the freedom fighters who laid down their lives for independence and fighting against the foreign rulers. The function was organised on the historic Ridge Maidan.

Addressing the gathering, Prem Kumar Dhumal, the Chief Minister paid tributes to the martyrs, thanking them for laying the very foundation of the country. He said that the 150th anniversary of the freedom movement would serve as a reminder to the present and coming generation to be always on the front when it comes on the country and its freedom. He said that Himachal Pradesh had also played its active part in the freedom movement as almost from every district freedom fighters fought against the foreigners.

Highlighting the state’s effort to retrace its freedom fighters so as to give them their due, he later on honored students who actively participated in various competitions organized to mark the celebration.