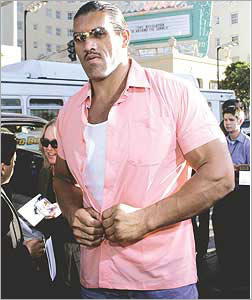 Shimla:Himachal has pitched in its bit to welcome and honour â€˜The Great Khaliâ€™ as the world known wrestler reaches his village Dhirayan in Sirmaur district.

â€œWe will recommend Daleep Singh Rana, more popular as â€˜The Great Khaliâ€™ for the national Padamshiri award for his exploits at World Wrestling Entertainment (WWE) bouts, Gulab Singh Thakur, PWD minister said at public function in Nahan on Tuesday evening that was held in honour of the wrestler.

Khali, better know as Daleep Singh Rana in the villages of Shillai is coming home after over three years as a much acclaimed wrestler who has challenged and beaten the best in the game at the WWE bouts.

At the function, the administration also facilitated, Jawalu Ram Rana, father of Khali and Tandi Devi, his mother, who are on the special guest list.

On arrival in India on May 2, Khali had his appointment list packed which included a meeting with President Pratibha Patil and celebrities like Sachin Tendulkar and Priyanka Vadra taking time out to get their children to meet the giant of a man.

In between, Khali has even done a film shoot for a Bollywood film.

When apprehensions were cast about Khali probably not being able to make it to his native village during this tour, he had rubbished it saying that he â€˜was longing to eat food cooked by mother handsâ€™.

Back home today the family today is celebrating the return of a son who has become an international star.

The villages and towns like Paonta, Sataun, Kamrou, Kafota and Shillai through which Khali passed thorough to reach his native village Dhirayan had made special preparations and held festival like celebrations.

Mangal Singh, brother of Khali, disclosed of having made grand preparations for hosting a feast for over five thousand people on his arrival in the village for today.

Sohan Singh, a resident of Shillai disclosed that Khali had donated each house in his native village with a satellite TV set, so that they were able to watch his bouts at WWE as the quality of reception from terrestrial and cable TV was poor.

The hero from Sirmaur also has a new house ready that now can accommodate his 7 feet 3 inch frame. The house also has a custom built double bed that was specially prepared by a furniture factory at Nahan.