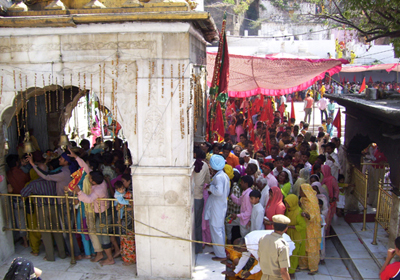 JAWALAMUKHI: More than 1 lakh pilgrims visited the famous shrine of Jawalamukhi in Kangra district of Himachal Pardesh, also considered one of the 52 Shakti peeths, during the Navratras which concluded today.

Thousands of visitors from Delhi, Punjab, UP, Bihar, Rajasthan, Haryana and Jammu and Kashmir, clad in all yellow visited the temple in these nine days. Long queues were a common sight while the town buzzed with activities and pilgrims reciting Vedic hymns and bhajans while going to the temple.

The lanes and bylanes of Mandir Mohala were as expected overcrowded. The “Havan” which started on the first Navratra concluded with ‘puran ahuti‘ today in which pandits and massed participated enthusiastically. 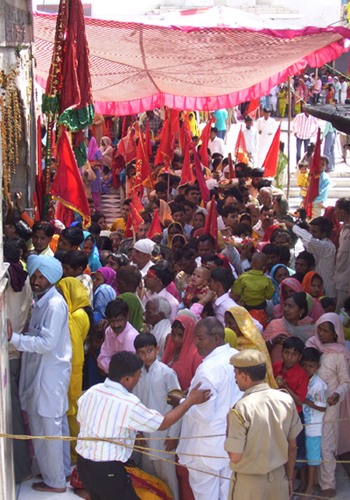 Mr S.K. Nayyer, the temple officer, said that it was for the first time that not a single chain-snatching or such a mistheft took place on the premises of th temple during the Navratras. The temple authorities said the pilgrims offered Rs 11,44,069, besides nearly 52 grams of gold and approximately 1 kg of silver.

Meanwhile, Swami Virenderanand Giri, the state president of the Himachal Pradesh Math Mandir Suraksha Samiti demanded that the temple towns in the state should be declared as ‘Holy towns’ and liquor and meat shops should be displaced permanently. He said that such shops were hurting the religious sentiments of the pilgrims.

Swami Giri also expressed shock over the prevailing water scarcity at Naina Devi and alleged mismanagement at the Chintpurni shrine causing inconvenience to pilgrims. He complained that Jawalamukhi was lacking proper sanitation and cleanliness, thus, demanding necessary steps from the administration.