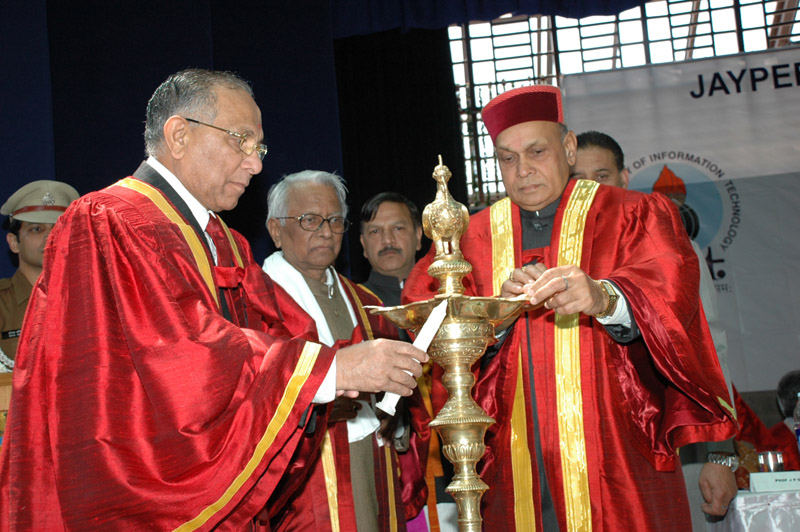 Shimla: Jai Prakash Gour, chairman of the Jyapee group has expressed interests in starting engineering and a medical college in Himachal Pradehs.

Speaking at the 2nd convocation of Jay Pee University of IT, JP Gour said that the university had potential and infrastructure to cater to the quality educational needs of 3000 students against present 1800 students.

On the occasion he also expressed his willingness to start an Engineering College at Hamirpur in near future besides Medical College at Palampur.

He said that against a 10 percent quota for Himachali students there were 18 percent students were studying in the IT University.

In his presidential address Governor VS Kokje, said that quality education being provided by the university deserved appreciation for entering into a comprehensive MOU with the DRDO for research activities, besides enhancing the teaching, research and development activities linkage with University of Florida, USA for faculty interaction.

He said that a new programme in Pharmacy was being offered to students seeking admission in the coming academic session.

Chief minister Prem Kumar Dhumal who was the Chief Guest in his address said that Himachal Pradesh was poised to emerge as a centre of excellence for learning and the stage had been set by J.P. University by setting up the First IT University of the country in 2002.

He said that the state had chalked out a multi- pronged strategy to herald the benefits of IT for its citizens and for the State as a whole.

Prof. Prem Kumar Dhumal presented the Chancellor’s Gold Medal at the 2nd Annual Convocation of the Jay Pee University of IT to Viplav Shankar Mishra in Bio Informatics for obtaining highest rank amongst all branches.

Manoj Gour, Executive Chairman of the University in his welcome address said that credit goes to Prof. Dhumal, Chief Minister who had opened the doors to set up such university, which was the only one of its kind in the country.

The university claimed that 90 percent students who would pass out in year 2009 had already found placement in the private sector.