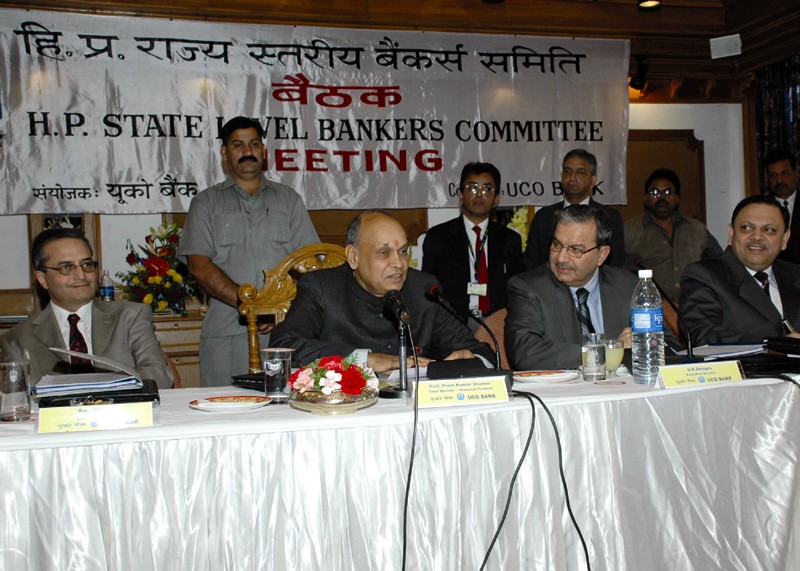 Prof. Prem Kumar Dhumal, Chief Minister, appealed to the banking community in the state to extend their fullest cooperation to form agriculture cooperatives to liberally finance the farmers in their diversified agriculture practices thereby making the basic sector income and employment generating and to be the partners in making Himachal Pradesh the role model for rest of the country. CM was addressing the inaugural session of the 110th State Level Bankers Committee (SLBC) organized by the convener, United Commercial Bank, here today.

He appreciated the banking fraternity for trebling the credit flow for agriculture from Rs. 386 crore in year 2004 to Rs. 1,183 crore during current financial year. He said that as a part of the drive to increase the agriculture credit flow, he urged Reserve Bank of India, NABARD and lead bank to coordinate a special drive during current financial year for issue of Kisan Credit Cards to every farmer in the state. He said that 3.40 lakh credit cards had already been issued and bankers needed to provide 100 percent credit coverage for the farmers on the analogy of household coverage completed in the state.

Prof. Dhumal emphasized the need for 100 percent banking treasury system in coming three months since all commercial banks had completed its target for switch over to banking treasuries and 14 sub-treasuries were awaiting linkage through local regional rural banks. He thanked the RBI and concerned banks for supporting the drive of the state government to convert all non-banking treasuries into banking treasuries for better cash management and control of treasury system. He praised the bankers for increase in the credit deposit ratio in the state from 56.26 percent, the incremental credit deposit ratio from 50.59 percent to 82.67 percent. He hoped that the ambitious credit plan target fixed at Rs. 4,230 crore for current financial year would certainly boost economic activities in the state.

Ravi Dhingra, Chief Secretary, said that hydro electric and tourism were other two sectors besides agriculture where bankers services were required. He said that identified hydro electric potential required to be exploited on priority to generate income to the state besides tourism which too had vast scope of expansion down to the village level where bankers could play pivotal role.

V.K.Dhingra, Executive Director of the Convener UCO Bank, said that the credit growth in the state was 23.13 percent during the last calendar year and agriculture sector had the highest of 22.99 percent followed by small scale industries with 18.25 percent and service sector with 13.11 percent.