Shimla: Chief Minister Prem Kumar Dhumal said that his government was attempting to improve the industrial investment environment by focusing on creating appropriate infrastructure in the remaining two years of industrial package allowed for the state.

Counting the BJP governments achievements in the 100 days in office at a media conference, the chief minister disclosed that the central government had approved a survey for 4-lane national highway 21-A from from Pinjore to Swarghat. 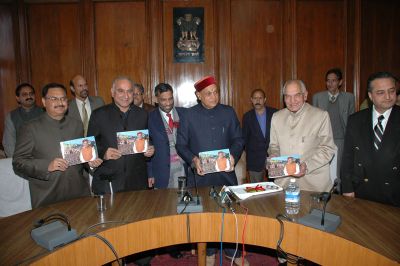 responsible for have wasted a golden opportunity to attract industrial investments into the state Dhumal said to improve the situation efforts were being made to improve road infrastructure. A public works (PWD) sub-division and a revenue sub-tehsil had been notified for Baddi, he said.

A meeting with the Punjab Chief Minister had resulted in a commitment to complete the Chandigarh-Baddi road by June 2009. The Punjab government has also agreed to extend the Chandigarh-Mohali express highway to Baddi. To remove road congestion the centre has sanctioned a survey for a four lane highway Pinjore-Swarghat that passes through the industrial belt, said Dhumal.

In response to a question, the chief minister denied that an audio CD of former chief minister Virbhadra Singh had merely been used to garner votes in an election. Dhumal said that the matter was sub-judice and the government would hold an inquiry into it if the High Court asked it for doing so.

The chief minister said that the opposition was in disarray and frustration of some members was visible.

He said that the state was disappointed with railway ministry for not having ceded to the genuine demand for expanding the hill rail network.

Despite having made a Rs 34 crore state budgetary provision and having the assurance of a Prime Minister Manmohan Singhâ€™s announcement, the central railway budget has only made a token provision for the Bilaspur-Bhanupali-Beri railway line, said Dhumal.

The chief minister counted relief for all section in his 100 days in office, which included women welfare schemes, introducing a bill for making 50 percent reservation in Panchayati Raj Institutions and urban local bodies, enhancing social security pensions and daily wages, sanctioning interim relief for government employees, and plans for introducing soil health card to farmers so that diversification in agricultural practices could help to improve farm incomes.