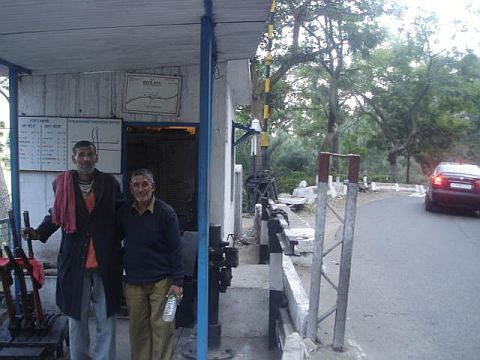 His job requires great guts and zest to man the major railway crossing in the wilderness near Jabli on century old Kalka-Shimla narrow gauge rail track. Though this historical track has received blitzkrieg publicity in media in quite past time but no one ever took fancy of Mahinder Singh who stands tall to manage the crossing without complaining much of his hard job.

Even as he is one of the smallest elements in the chain, but he stands proud to be an essential part of the marvelous human engineering feet. The passerby would spot this lean and tall soul attired in railway’s khakhi dress just close to tunnel no. 16 running parallel of Kalka-Shimla national highway. As toy train chugs in close to the crossing, Mahinder allows the pass with his green flag with a broad smile on his motion less face.

Sitting closed to the crossing in an old fashioned box type railway cabin inscribed with railways technical slang, Mahinder prefers puffing bidis to kill the chill of wooded hills surrounding. Ever since he joined the Railways services in 1991, this phase of his life “he feels” is toughest and scarcest one.

Mahinder’s day starts at 5 am as he has to relinquish his day’s first assignment at 5.15 am when first train enroute to Shimla usually reaches at crossing. “It’s a responsible job. I have to remain alert every moment to avert any mishap.” says Mahinder in his typical haryanvi dialect. Mahinder who hails from Ambala and is staying away from his family shares the crossing with Thakur Das who is a local person.

With their adjustments, both manage their morning affairs without leaving crossing unmanned. With a short interval, Mahinder again resumes his liabilities. In a day, this crossing witnesses 10 trains. “In peak season, railways authorities increase the train service due to the advent of more tourists to Shimla”, says fifth class pass Mahinder Singh.

Besides giving signals, Mahinder and his colleague are responsible for every technical aspect of the railways ranging from excel, disc brake, signals to avert any causalities or sabotage. Mahinder spends his days with British time hand lamps and other railways stuff lies in the corner of just 6 X 7 feet room.

The day brings mixed experiences for Mahinder and his companion. “Sometime, people scold us to put up the barricade too early to check vehicle flow. Though we feel bad on that but safety of people is always our top priority.” Along with such instances, he sometimes shares some joyous moment of his life.

“Tourists and commuters put their brakes on this picturesque view. Some poses with the railway crossing with tunnel at their backdrop. Some request us for their memorable click, some enquires about the place and railway line. Our delight exceeds when little kids inside the rail coach waves to me, remarks Mahinder.

There is no TV, no radio and any form of entertainment even in duty hours made us alone. There is no population in the vicinity. Jabli and Sanawar are the two and three kilometers against the opposite directions. The duty hours continue till 10:15 pm when the last train to Kalka crosses from there.

Spending a night amidst dense forest sometimes becomes too difficult for them. The gust winds amidst pines mixing with the barks of the wolf and other wild animals sometimes become unbearable for them. But yet Mahinder Singh and his colleague are proud to be a part of this historical rail line.