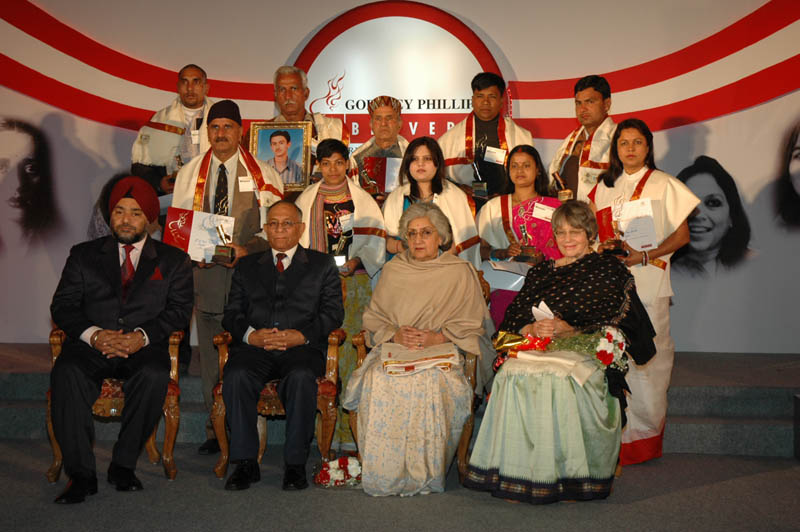 Shimla: V.S. Kokje, Governor stressed upon women empowerment and said that women in our country should be encouraged to move ahead and progress in life. He said that it could be achieved when organizations, individuals and corporate houses take initiatives to provide opportunities to women to gain economic freedom and dignity in the society. He was speaking as Chief Guest in the Bravery Awards Ceremony organized by Godfrey Philips India Ltd. last evening.

Details about the winners:

Disabled at an early age with polio in her leg, Charanjit has struggled hard to reach where she has.

As a child, she could not play with other children but that only made her more determined. As she played harder to keep up with the other children, her strength of her mind led to her ask her coach to let her represent her school in sports. Coach dissuaded her by saying that you would not win and will let your school down. That event only served to spur her on.

Her mother was the strength behind her ambition. Her mother is no more but her words continue to motivate her. Her sister echoes the same support that lets Charanjit face all challenges with resolve.

As she went on to college, she played for her institution and she won a silver medal for her game. That gave her the support she needed.

She went on to participate in the Para Olympics in Bangalore where she was selected to represent India in IBAD World Badminton Championships Thailand 2007 for the physically challenged and – she won gold. She also has been runner up at the 4th All India Super Six Tournament for the Physically Challenged 2008 in Orissa.

Coming from a middle class large family that had its own problems with finances, she is still struggling with getting money for buying goods sports equipment.

In spite of the recognition she has achieved at various games, both international and national level, she neither has a coach to help her, nor any financial support to pursue the game on higher level.

However, she shrugs that off, calls herself â€˜result orientedâ€™ and continues to fight against all odds.

The inhabitants of the house raised an alarm. Sukhbir Singh, his ex-Army man father, Om Prakash and some others who lived in adjoining houses gave chase to the dacoits.

Sukhbir caught hold of one dacoit and did not let go his hold despite being fired at by the other dacoits. Eventually Shri Sukhbir was shot dead and the dacoits escaped.

For his exemplary courage and bravery, Late Sukhbir Singh of Hissar is awarded the Gold Award in the category of Physical Bravery of the 16th Godfrey Phillips Bravery Awards.

Silver Award
Brief Account of Physical Bravery
Thakur Singh, 35, has been known for several acts of physical bravery. Four days before Diwali in 2004, his family was making preparations for the festival when his wife, Raveena Devi, went to light a kerosene stove to warm some milk for her 6-month-old son.

The stove was leaking and her saree caught fire. On hearing her cries of help, Thakur Singh rushed into the kitchen and quickly removed his sweater and enveloped her in it. He and Raveena survived with 45% and 60% burns respectively. They had to be hospitalized for over 5 months.

Again Thakur Singh proved his fearlessness when he saved five school students from being engulfed by the raging waters of the Baner rivulet in his village. Due to heavy precipitation in the Dhauladhar range, the water level had considerably risen. These students of HD Public School, Hoshiarpur had come to the local Chamunda temple for blessings. After their temple visit they went to Baner and were posing for photographs amidst the rocks when the rising water level trapped them.

On hearing their cries of help, Thakur Singh who was in Madir market tending his shop ran to the spot. Without caring for his own safety he brought back all the five students to the safety of the shore single handedly.

For his exemplary courage and bravery Thakur Singh of Kangra is awarded Silver Award in the category of Physical Bravery of the 16th Godfrey Phillips Bravery Awards.

Bronze Award
Brief Account of Physical Bravery
On 16.11.07, Mamchand, 38, got into an auto rickshaw at Sector-21, Panchkula and was coming towards Jirakhpur. There was another passenger in the auto. As they were entering Jirakhpur, the auto tried to overtake another auto near an over bridge in which the lone passenger was a 50 year old woman. The two autos collided.

As a result of the impact, the auto on the left skidded and fell on its side and the old lady in it was thrown into a 90-foot deep dry ditch. Though a crowd gathered within minutes, no one attempted to rescue the woman in the deep ditch. Yet Shri Mamchand was different.

Displaying exemplary courage, he reached the woman after negotiating the rocks and rubbish strewn in the ditch. He found her conscious but severely injured. Mamchand was himself bleeding and his clothes were in tatters from the thorny vegetation in the ditch. Yet, he managed to bring the woman up. He found the crowd gathered there beating up his auto driver. In order to save the man, Mamchand said he would take him to the local police station and freed him from the mob. After requesting a person to take the injured woman to a hospital Shri Mamchand made the auto driver go a few hundred yards and then released him. Consequently, he saved two lives.

For displaying exemplary courage and bravery Mamchand of Kurukshetra is awarded Bronze Award in the category of Physical Bravery of the 16th Godfrey Phillips Bravery Awards.

Ms Rajni nabbed a scooter-borne youth who snatched her purse on 6 August 2007 when she was returning from her office.

It was around 6.45 p.m. that two youths drove close to her. The pillion rider took away her purse from her scooter basket.

Ms Rajni followed them and requested them to return her purse, but they ignored her and sped away. Rajni was not the one to allow them to escape. She followed them and rammed her scooter into theirs. Both fell. Rajni received multiple injuries. The pillion rider escaped and the passersby nabbed the driver.

Sr. SSP, Chandigarh along with ASP and other officers visited her residence and awarded her commendation letter. She was also given a cash prize of Rs 5001/-

Lt. Col Bishan Dass (Retd.) during his 30 years of service has been an active environmentalist and has won many prizes in tree plantation and creating awareness about environment protection.

Lt. Col Dass, who is now getting disability pension, has immersed himself into social service. He has added eradication of social evils like female feticide, drug addiction, domestic violence against women to his area of activities.

He is also extending help to disabled and physically handicapped persons. He has been regularly organizing seminars, exhibitions and contests on energy saving, rain water harvesting, pollution etc.

On a number of occasions he has organized free pollution check up camps at Patiala and has planted over 1-lakh trees in and around Patiala and also at Nabha, Sangrur and Ludhiana

He distributes saplings free of cost and insists that people look after them and see them grow.

For providing solace to the disabled and for working for environment, Lt. Col. Bishan Dass (Retd.) of Patiala is awarded Gold Award in the category of Social Acts of Courage of the 16th Godfrey Phillips Bravery Awards.

His organization also provides monetary aid to helpless poor persons, widows, handicapped, blind and school going children. The organization provides blankets, rugs, pillows, bed sheets, etc., to hospital patients free of charge every night. These are collected every morning for redistribution in the evening. Fruits are distributed to patients every Sunday.

As Gen. Secy. of another organization, Swargashram Nirman Avam Sanchalan Samiti, Shri Chadda has taken the initiative to provide firewood and other logistical support at subsidized rates for cremation of dead bodies at the local cremation ground. Proper records are also now kept of cremations.

In recognition of the zeal and dedication to numerous social issues, Hem Raj Chadda of Hamirpur is awarded Silver Award in the category of Social Acts of Courage of the 16th Godfrey Phillips Bravery Awards.

Silver Award
Brief Account of Social Acts
32-year old Smt. Meera Thakur inherited social welfare work from her parents. She is involved with such acts since childhood. Presently she is providing free training to unemployed poor women to make them self-reliant.

The classes are run for three hours daily. She plans to participate in handicraft exhibitions in various states.

In recognition of the zeal and dedication to prevent accidents, Smt. Meera Thakur of Chandigarh is awarded Silver Award in the category of Social Acts of Courage of the 16th Godfrey Phillips Bravery Awards.

Ms Manju Kaushik is a dynamic social worker in the field of women empowerment and national integration. She has been fighting against social evils, particularly female feticides in villages.

She has received National Youth Award from the Ministry of Youth Affairs and Sports, Government of India. Department of Women and Child Welfare, Govt. of Haryana has honoured her with State women Award for doing commendable work in the field of women empowerment.

Ms Kaushik has been encouraging adventure sports among women in state. She got 1,500 saplings planted in various schools in 2007. A blood donation camp was organized in Mahendragarh on the 150th Anniversary of Indiaâ€™s1 War of Independence in 1857. She led hundreds of women to donate their blood for the army men.

In addition she has also been participating in campaigns to fight terrorism, spread of literacy etc.

For displaying concern for society and need for blood donation, and environment, Ms Manju Kaushik of Mahendragarh is awarded Bronze Award in the category of Social Acts of Courage of the 16th Godfrey Phillips Bravery Awards.

Sekhar Bhattacharjee has been working with jail inmates in Kaithu and Kanda jails in Shimla for the last 10 years. He has changed the mindset of many angry, even violent prisoners. He has taught them to be brave, honest and forgiving.

Shri Bhattacharjeeâ€™s objective is to reform the prisoners. For this, he adopts different ways. He holds theatre workshops with inmates. Makes them act in plays, while he directs.

He also teaches them yoga.

For displaying concern for society even in the hour of tragedy, Sekhar Bhattacharjee of Shimla is awarded Bronze Award in the category of Social Acts of Courage of the 16th Godfrey Phillips Bravery Awards.

Vinod Paul is not only closely associated with social welfare activities in his district, but has shown great courage to save other lives.

He saved the life of a 3-year old child for which the chairman of Jhansa Punchayat Samiti honoured him. On another occasion he saved five children from fire, which was caused by a cylinder leak. He was felicitated by Kosikalan Brahmin Samiti.

For displaying concern for the society and need for voluntary blood donation, and for saving many lives, Vinod Paul of Kurukshetra is awarded Special Award in the category of Social Acts of Courage of the 16th Godfrey Phillips Bravery Awards.