Shimla: With the speaker not ceding to the demand of the congress about taking up a discussion over the issue of a 25 percent hike in bus fares, the opposition staged a walked out in the Vidhan Sabha, on the opening day of the budget session, today. 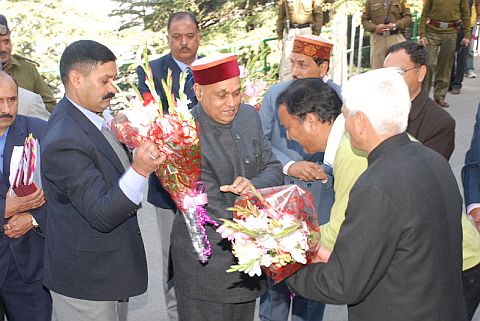 Speaker Tulsi Ram did not permit the discussion on the ground that the opposition had not served a proper notice within the stipulated time. He said a proper time would be allotted for a discussion on the issue after a notice is served by the congress legislature party.

Speaking to the media in the opposition lounge senior congress leader Kaul Singh Thakur said that it was an important issue concerning the common man and the government should have allowed a discussion on it. â€œAs it was not much business was listed for the day,â€ said Thakur.

Leader of the opposition, Vidya Stokes, said that in one stroke the BJP government had made liquor cheaper and traveling expensive. â€œThe steep 25 percent bus fare is unjustified as the central government had only marginally increased prices of petroleum products,â€ she said.

Former transport minister GS Bali claimed that after implementing the transport tariff hike, the state transport fares were the highest for any hill state in the country. â€œInstead of trying to bring about cost efficiencies in running the transport services, the government had further burdened the system by offering free travel for some during some festivals; the cost of which would have to be borne by others,â€ he said.

Bali said that as many as 15 percent of passengers in Himachal Roadways (HRTC) were pass holders who were permitted free travel. If we account the students concessional passes then the privileged travel group make up 27 percent, he added.

Congress man Kuldeep Singh Pathania said that state transport service had a social obligation for which the government should provide state grants and not make traveling more expensive for the common man.

Chief minister Prem Kumar Dhumal said â€œthe government was prepared for a discussion on the issue to justify its action and was in no way shying from it. He said â€œThe congress still has to get accustomed to behaving like an opposition party. Their Seriousness on the issue can be gauged from the fact a notice to the speaker was not even served on time. The speaker had no option but to reject the opposition demand, said Dhumal.