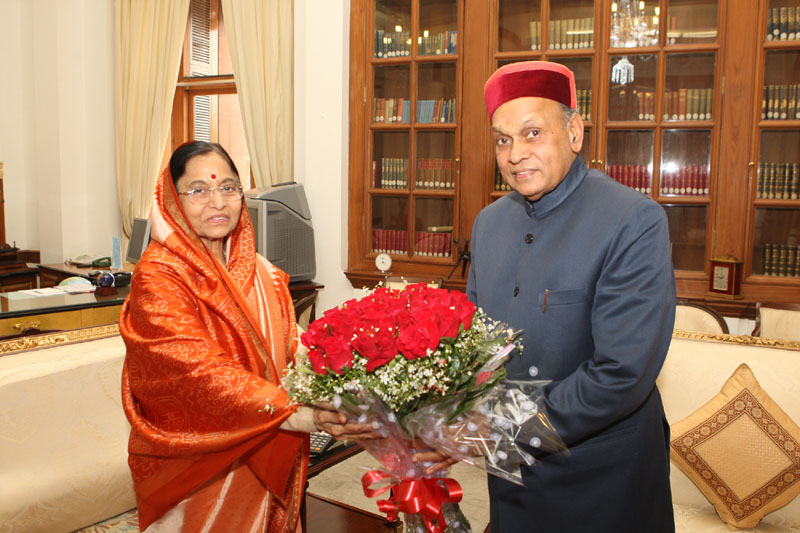 Dhumal also requested President to consider reversing the army recruitment policy based on population criteria under which the soldiers intake is taken on the basis of populations of the concerned States.

He informed President Himachal Pradesh has made maximum sacrifices for the motherland during foreign aggression and state has got maximum gallantry awards during all the wars held in independent India. He cited the example of Kargil war in which the Himachali domicile soldiers were awarded 2 pram Vir Chakra out of total four Pram Vir Chakra awarded during the war.

Prof. Dhumal also requested the President to order the handover of Annadale ground from army to civil authorities and told that the lease of the said ground has expired in early 1980s but despite of it, the army has been holding control of the said ground.

Other points Dhumal raised were:

Providing fair share to the state Govt. in electricity generations.

Chandigarh city is getting more electricity from Bhakra in Comparison to Himachal Pradesh.

Pong Dam and Beas Satluj Dam where in the State has been again deprived of its due share in electricity and people have also not been properly rehabilitated.

State given meager 15 M W electricity from Beas Satluj Project on ad hoc basis in 1978 and its legal claim has not been released so far even after 30 years of completion of the project.

He informed that HP has forest wealth of Rs. 1.50 lakh crore and state can earn revenue of Rs. 1000 crore annually by scientific cultivations of forest wealth but added that State had imposed complete ban on felling of trees in Himachal Pradesh as result of which the water and air quality in entire north India has improved acting as LUNGS OF INDIA and pleaded that state should be compensated for revenue loss on account of ban on green felling.

He demanded that Central Govt. and Planning Commission should provide special assistance to the State for preserving forest wealth on the pattern of European countries.

He also demanded that State should be allowed to impose 10 paise per unit generation tax on hydel projects commissioned in the state.