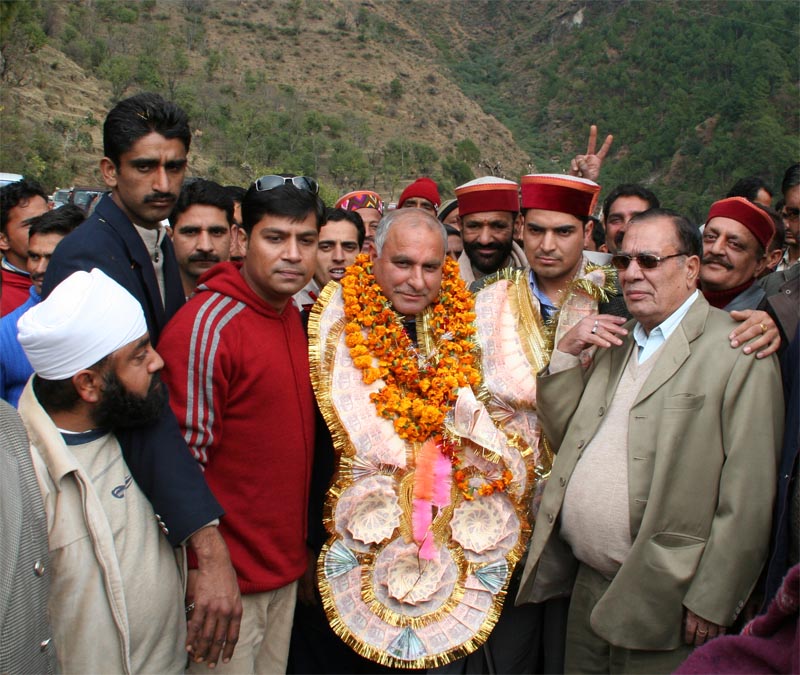 PALAMPUR : Thakur Gulab Singh PWD Minister and senior BJP leader said here today that the top priority of BJP government would be to accelerate the development activities in the state which had come to standstill during congress regime. He said the conditions of the roads including state and national highways had gone from bad to worse in past five years. Besides, the internal roads in the state are also in bad shape. He said government launch a special campaign to set all the roads in order. Thakur regretted that despite getting huge funds from the union government under PMGSY programme, still congress government had done little in this field in past five years.

Addressing newsmen here this morning Thakur Gulab Singh said the besides, maintaining the existing roads, BJP government would lay stress on the widening of all roads connecting district headquarters with state capital. He said there was manifold increase in the traffic on the roads in past five years but the width of the roads were the same as it was ten years ago, if necessary steps were not taken there would be big problems in the coming days.

He said BJP would government also speed up the four lanning of national highways in the state. In those case where MOUs had already been signed by the previous government, BJP government would ask the executing companies to complete the projects under time bound plan and government would extend full cooperation. Land acquisition process would also be geared up to avoid the delay in the completion of the projects.

Referring to the slow execution of Pathankot- Mandi national highway, PWD minister said he would meet the Union Minister for Road and Surface Transport and request him for more allocation funds for this road. He said this road carry importance because of the fact that it links Pathankot with Leh and used by the army for lifting of their supplies to forward areas. Minister said during Kargil conflict entire supplies to Leh and other forward areas were carried through this route as Sirinagar- Leh NH had come under firing range of Pakistan.

He said Chief Minister Prem Kumar Dhumal had already announced that he would change the face of all important roads of the state in next one year and BJP government would stick to it.

He said all efforts would be made to bring more transparency in the functioning of Public Works Department in the state and stress would laid on the quality construction of roads and building. He said any officer found indulged in the corrupt activities, would not be spared and stringent action would be initiated against him.