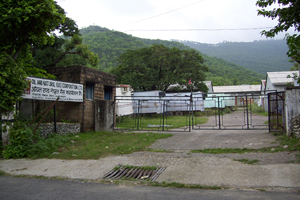 Jawalamukhi: Once bustling with activity in connection with the drilling operations of the Oil and Natural Gas Corporation (ONGC), this township now is confined to the holy shrine of Jwalamukhi.

The offices of the ONGC, in and around the town have virtually been locked for the past Ten years as the corporation has abandoned drilling operations in the Changar Talai area of Deotsidh and Baggi, near Jwalamukhi. The store office of the ONGC has become a junk-yard for condemned equipment and tools scattered around. The administration office of the ONGC on the other side of the town has been taken over by the state government, where a Degree college has been set up by the Temple trust JawalaMukhi.

The exploration of hydrocarbons in the Himalayan foothills of Himachal was undertaken by the ONGC from its inception in 1956 due to the presence of oil and gas in the area.

Before Independence a survey was conducted in 1835 by Medlicott, the Superintendent of the Geological Survey of India. The area was examined scientifically in 1853 by Macardiew of the GSI. In 1856 a committee was appointed for the purpose by the Punjab government.

Macardiew, accompanied by Major Lake, Commissioner of Jalandhar Division, and two civil engineers visited the area. The committee suggested the appointment of a person by the government to collect samples of hydrocarbons present there. These samples were examined in Lahore in 1940. The government expressed willingness to launch exploration operations. Meanwhile, Mahatma Gandhi’s Quit India Movement was launched, and the plan was shelved.

After Independence Jawaharlal Nehru asked Indian geological scientists to try and find oil and gas in the area. The operations were conducted with the assistance of Romania, Italy, France and the erstwhile USSR.

Besides carrying out geological mapping and seismic surveys, drilling of exploratory wells was undertaken in phases on the basis of surveys carried out by the CGG of France in 1984. The drilling operations of three super-deep wells commenced in 1987 in Changar Talai, Nurpur-Lunj and Jwalamukhi-Baggi. Out of these three wells only the Jwalamukhi-Baggi well has been completed to a depth of 4935 metres. The Nurpur well has not made much headway, while the Changar Talai well has been abandoned prematurely. Now the operations have been shifted by the ONGC to Madhya Pradesh. The ONGC authorities claim that work had to be abandoned because oil was not struck at any of the three sites. But reports said the ONGC had closed down the drilling midway though the chances of gas being there were bright. Even at the Changar Talai well drilling was done up to a depth of 6,720 metres against the target of 7,000 metres. However, oil could not be struck.

At Nurpur the drilling was stopped at a depth 4,935 metres against the target depth of 7,000 metres. Millions of rupees and valuable foreign currency were spent by the government through the ONGC on this project without getting any tangible results.

People of the area have urged the Centre to set up an inquiry commission to prove why the drilling operations were given up midway. They claimed that oil and gas existed in the area, but the ONGC wound up operations due to political considerations.